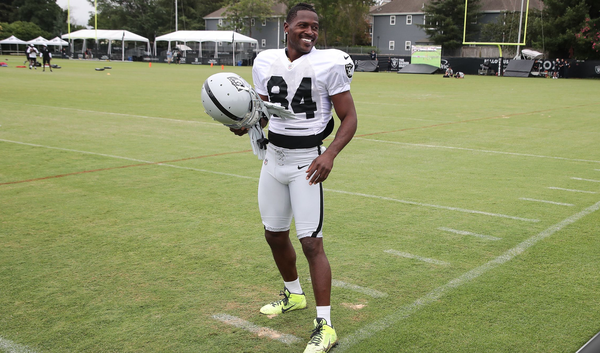 In what has become one frustrating incident after another, the NFL has ruled against Raiders wide receiver Antonio Brown’s grievance over his preferred helmet. The league office informed Brown and the Raiders of its decision. Brown, who hasn’t played a single down for the Raiders, has already been a distraction whether its frostbitten feet from a cryo chamber or showing up to camp in a hot air balloon.

The known gridiron diva hasn’t practiced much with the team but has been a major focal point in the season premiere of HBO’s “Hard Knocks,” which is documenting the Raiders’ 2019 training camp. Needless to say, the producers are “Hard Knocks” are licking their chops over the drama Brown has brought to Napa.

With its final decision made, the NFL informed Brown Monday his grievance was denied.

According to to two sources, the arbitrator has ruled against Antonio Brown in his grievance to wear the old helmet.

"While I disagree with the arbitrator's decision, I'm working on getting back to full health and looking forward to rejoining my teammates on the field. I'm excited about this season appreciate all the concerns about my feet 🦶!” #AlwaysAFight #Represent #itsbiggerthanme

This whole ordeal started last week when Brown received notice his helmet — the same one used since his rookie season — is no longer certified by the NFL. As a result, Brown is required by the league to change to a new approved model for the 2019 season, and, based on his recent comments, isn’t something he’s willing to do. The Raiders diva has even gone as far as threatening to sit out and leave the game for good, if he can’t wear his favorite helmet.

And now this: Raiders’ WR Antonio Brown has told team officials that, unless he gets to wear his old helmet, he will not play football again, per league sources.

Brown’s insistence, mixed with his constant negative spotlight, seems to be wearing thin on head coach Jon Gruden, who made it clear one player will not drive the team’s focus nor become a distraction. actually defended his marquee receiver.

“I support this guy. I think that’s what needs to be said,” said Gruden after the Raiders’ 14-3 preseason win over the Los Angeles Rams. “I don’t know what anybody’s writing or what anybody thinks, but this foot injury wasn’t his fault. This was a total accident. It really wasn’t his fault, and it’s a serious injury. I know that some people are [joking about] it, but it’s really not a laughing matter. The guy is hurt, he didn’t do anything wrong, and the helmet thing is a personal matter to him.”

Brown’s preferred helmet, the Schutt Air Advantage, was not found to be an unsafe helmet in testing based on current standard by the National Operating Committee on Standards for Athletic Equipment (NOCSAE). However, the NOCSAE generally does not approve any athletic equipment more than 10 years old.

Some experts and fans wonder if this is just another ploy by Brown to commandeer the spotlight while working as little as possible at training camp and in the preseason. And, with a history of drama, it’s hard not to think the helmet issue is less about safety and more about Brown’s ego.

I honestly believe his feet have caused a decline we have not seen yet and he is using his helmet to either buy more time for recovery or eventually use it as an excuse for his decline in production when he does play. @AB84 #AntonioClown https://t.co/J2orGzmOnn

So Antonio Brown has a serious decision to make. Retire and pass up the $ or play and get the $. I do wonder if he’s using the helmet issue as an excuse to bail. The NFL made its decision and it’s not in his favor.

Ridiculous that Jon Gruden would support Antonio Brown in this helmet fiasco. It's a safety issue, but I think there is more to this than Brown is letting on and the helmet thing is an excuse. @Raiders need to get this guy in check and tell Gruden to parent here. #NFL #Raiders

As this drama unfolds surrounding Antonio Brown’s grievance, it sure doesn’t paint the 31-year-old in a positive light after being basically run out of Pittsburgh. Supremely talented, is he burns this bridge with the Raiders, his career should be finished. Whatever the reason might be, training camp and the Raiders’ season should take far more precedence than Brown’s helmet preference.

I mean, it could be worse…he could be wearing Rick Moranis’s helmet from “Spaceballs.”