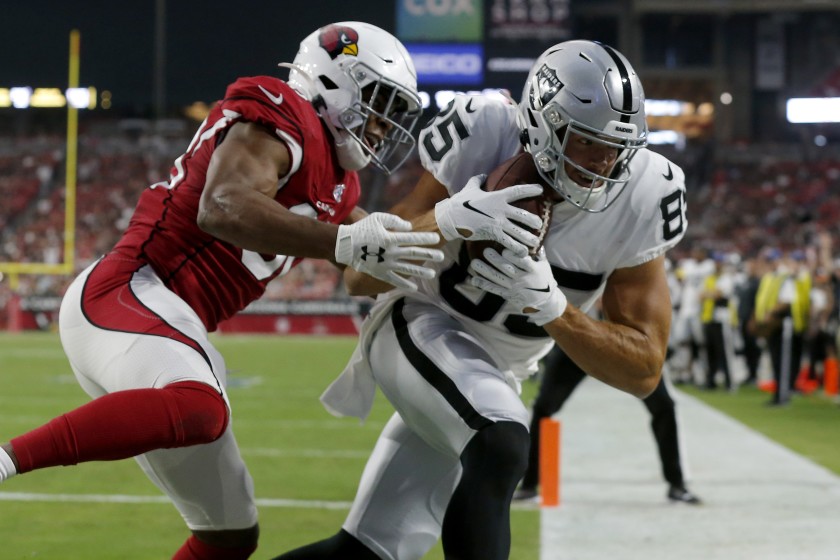 The Oakland Raiders went into Arizona and played well in their second preseason against the Arizona Cardinals. The Raiders won the game, 33-26, but the score does not show how the Raiders dominated the game. In the second quarter, Oakland was leading the game 26-0. The Cardinals got two touchdowns int he final three minutes to make the game look close, but the game was never in doubt. Here are some observations from the game against Arizona.

Jacobs drafted with one the Raiders three first-round picks saw his first action this preseason. Jacobs ran the ball four times for 21 yards. His longest run was a gain of eight yards. The former Alabama star ran with quick inside moves and also ran with some power in between the tackles. Jacobs showed enough in his first preseason action, so Gruden pulled him. He will be a crucial contributor for the Raiders this season.

Quaterback Derek Carr made his preseason debut on Thursday night. Carr played only one drive and led the Raiders down the field for a touchdown. The drive was six-plays for a 75-yard drive. Carr completed two passes, and one was fade down the field to Tyrell Williams and a 13-yard touchdown pass to Ryan Grant. After the impressive drive, Carr left the game, and Mike Glennon took over.

Mike Glennon struggled last week with interceptions but made up for it on Thursday night. Glennon completed 11 out of 14 passes for 175 yards and two touchdowns, one being a 53-yard touchdown throw to Rico Gafford. Glennon did miss a touchdown pass to Darren Waller in the first quarter. Once again, Glennon looked comfortable and threw the ball downfield nicely. Avoiding bad interceptions was important for Glennon after last week game. Gruden hates turnovers.

Nathan Peterman was 8-for-8 with 41 yards passing. Peterman had a good command of the offense, ran some excellent read-option plays. He averaged only 5.1 yards per pass. I think Peterman does not want to turn the ball over given his history of throwing interceptions. Sooner or later he is going to have to show he can throw the ball downfield. All three Raiders quarterback played a good game on Thursday.

Its just preseason but the Raiders defense looks faster than they did last season, especially in the secondary. With more speed, Paul Guenther can dial up his famous double A-gap blitzes he likes. The Raiders defense held Kyler Murray to 3 of 8 passing for 12 yards.

In the second quarter, Paul Guenther dialed up a slot corner blitz with LaMarcus Joyner that forced the Cardinals into a safety. The Raiders had three sacks in the game — plan on seeing a lot more blitzing this season from the Raiders with improved speed on the defense.

The Raiders play next Thursday in Canada against the Green Bay Packers. It is the third preseason games; some people call it the dress rehearsal. Starters might play into to the third quarter as they get ready for the season. Who knows maybe we will see Antonio Brown play in Canada.