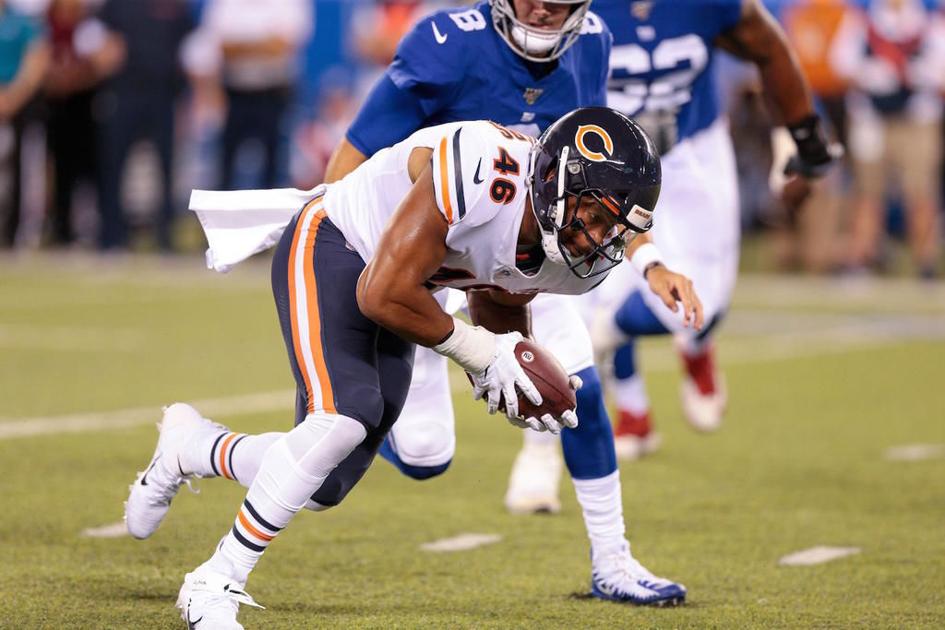 The Chicago Bears lost their second-straight preseason game in New York 32-13. It was another sloppy affair with lots of missed opportunities. Matt Nagy seemed excited about it because the game will provide plenty of coaching tape. One other thing is it also clarified the status of several roster battles going into the home stretch before the opener against Green Bay. After some notable winners and losers last week, there is a whole new cast of names this time around.

So who stood out for all the right reasons, or all the wrong ones?

Nobody remembered this guy was even on the roster. Vaughters finally decided to remind them with an outstanding performance at MetLife Stadium. He had a highlight reel strip-sack of Daniel Jones early in the game and two more standout pressures later on. One of them led to an interception. The other came close to forcing another. The former CFL edge rusher has interesting skills that might be worth keeping around.

The Bears drafted Whyte in the 7th round because they felt his speed and underrated strength were two things that could look really good in their offense. He had a good first preseason game against Carolina and now followed that up with a nice touchdown in New York. Not to mention a big kick return score that was called back because of a penalty. In the battle between him and Ryan Nall, he’s just clearly more explosive.

A rookie undrafted free agent out of Appalachian State, Duck needed to do a lot in order to make a pretty deep roster at cornerback. After a decent showing in week one, he stepped up his game in a big way against the Giants. This included one of the best interceptions of the entire preseason. A diving grab at the goal line to deny New York a touchdown before returning 60 yards. Just a heady, athletic play that was certain to get him noticed.

After missing his first kick of the preseason last week, Pineiro was up against the wall in the competition for the job. So he could not afford another setback it what likely might’ve been a do-or-die game. Thankfully he came out strong, connecting on a 41-yard attempt before adding another from 27 late in the first half. Elliott Fry helped his cause even more by missing one from 47 during his biggest opportunity. Pineiro is right back in the mix now.

It was a brutal night for the reserve tackles. Rashaad Coward left the game with an elbow injury. Cornelius Lucas was abused multiple times by Giants pass rushers. This suddenly puts the depth on the edges in serious question for the Bears. Neither of them was experienced to begin with. Now one is hurt and the other looks overmatched. The team may want to think about finding some veteran help to bolster the position.

Sowell moved to tight end because the Chicago Bears felt it was his best chance to make the roster. Thus far it doesn’t appear to be doing him any favors. He’s done nothing in the passing game as a receiver and his blocking hasn’t been any better after allowing a sack in the first half. Lack of competition may be enough to save his job as the 4th tight end but not if he continues to play like he has. The guy simply hasn’t been adequate, let alone good.

The former 6th round pick out of Utah must be feeling the heat by now. This marks the second-straight week he’s failed to make any notable play on defense. His pass rush is not good and he was badly mauled in the ground game at times. The guy isn’t strong enough to set the edge and his lack of true speed doesn’t help either. He looks like what he is. A former late round pick. With Isaiah Irving looking better and now Vaughters emerging, his roster spot is in trouble.

Franklin is such a good story. Spent times as a quarterback and a wide receiver in college. Was asked to switch to corner last year, made it on the practice squad and looked like he was in good position for a roster spot after a strong preseason debut. Then he was badly burned by the Giants for multiple big plays. That combined with the Duck’s standout play has put his thin grip on the final corner spot very much in doubt.