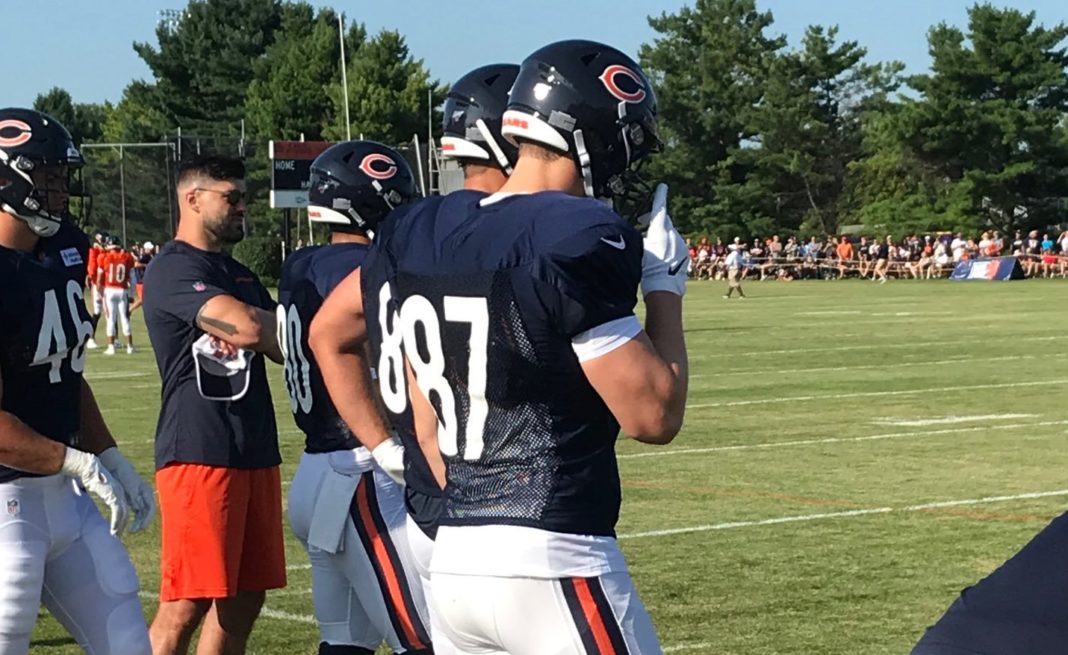 It’s never the best thing to overreact to training camp, but then again trends can usually be found if one looks close enough. Right now the Chicago Bears practice schedule has revealed a few realities. The defense is still great, especially Khalil Mack. The wide receiver depth is better than it’s been in a long, long time. Mitch Trubisky appears sharper and the running backs much more versatile than last year.

All good signs. However, not everything is sunshine and rainbows down in Bourbonnais. No roster is perfect and it seems not every position group is having the best experience. One that continues to garner concerns from both fans and media is the tight ends. Trey Burton remains the starter as he seems fully recovered from offseason sports hernia surgery. Beyond him, it’s becoming a field of question marks.

Adam Shaheen has missed all but two practices thus far with back problems. He tried to give it a go on Thursday but left after warmups. Ben Braunecker, whom they just re-signed this offseason seems to be having issues hanging onto the ball of late. Last but not least, converted tackle Bradley Sowell has failed to stand out at his new position as well.

GM Ryan Pace has said that the team is constantly monitoring the waiver wire for potential help for the roster. Granted, he was talking about kickers when asked that question but that doesn’t mean other positions are off the table. Pace has said his job is to get the best 53 players on his roster as possible. Right now the tight ends are looking like one of the most noticeable weak points on an otherwise strong depth chart.

Shaheen can’t be relied on to stay healthy. Braunecker is a special teams player who hasn’t really ever stood out on offense. Dax Raymond and Ian Bunting are undrafted free agents. The Bears may have to think about adding some veteran depth to this group. Somebody who can provide them a little more stability in case Burton’s own health issues happen to return. Pace has been good at working the wire in the past.

This will be something to monitor as the preseason gets underway. Those games will feature backups playing most of the way, so it could come down to who stands out (or fails to).