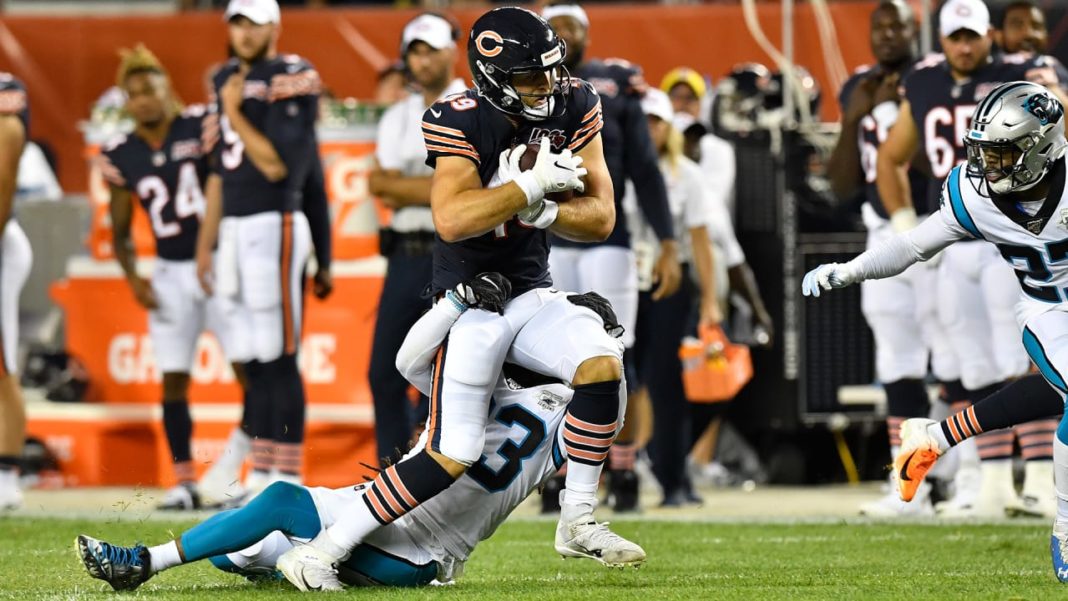 Matt Nagy and the Chicago Bears coaches after a tough task ahead of them. With only two weeks left, they have to start making decisions on which 36 players of the 89 currently on the roster will not be allowed to continue into the regular season. It isn’t something enjoyable, especially when a team like this has such a deep talent pool. It’s virtually certain the Bears may have to let go of one or two good players who have a bright future in the NFL.

During his Thursday press conference, Nagy was asked which positions he’d be evaluating the closest. His three choices weren’t all that big of a surprise. Each has importance to the Bears overall roster but also feature some of the closest battles for the remaining available spots. Here’s what they were and a breakdown of each position as they stand.

Chicago Bears coaches have tough calls to make at those spots

It’s not hard to see why Nagy and his staff are so fixated on those positions. Each of them has arguably the most intriguing position battles happening on the roster. Each one could have potentially significant consequences for the team if they end up making the wrong decision. Thus they are trying doubly hard to ensure they make the right one. So here is the status of each going into the third preseason game.

Three players look like locks for the final 53 at present. Trey Burton and Adam Shaheen are the #1 and #2 options on offense. Ben Braunecker will make it as a part-time offensive reserve and special teams standout. That leaves one more spot open in a three-way race between Bradley Sowell, Ian Bunting, and Dax Raymond.

Sowell was converted from offensive tackle this year and is the best blocker of the three. Bunting has showcased considerable skill as a pass catcher and is also 6’7. However, his blocking needs a lot of work. Raymond has raw potential as a receiving threat but hasn’t yet made an impact in game situations.

Roquan Smith and Danny Trevathan are the unquestioned starters. Smith is poised for a possible Pro Bowl run while Trevathan remains one of the most consistent players on the roster. The confusion centers on who the backups will be. Odds are the Bears will carry two of them, and they have three who look deserving of that honor.

Nick Kwiatkoski has been a primary backup for the Bears since 2016, often filling in for injuries whenever needed. He’s a solid run defender and experienced special teams player. However, time has shown he is a major liability in coverage that opponents have exposed. Joel Iyiegbuniwe was a special teams standout as a rookie last year and has huge athletic upside. He still needs work on his fundamentals and gap discipline though.

That leaves Josh Woods, a former undrafted free agent who has been a big standout in training camp this year. He’s got good size, solid athleticism, and plays the game with constant energy.

The Bears had a great pairing last year with Kyle Fuller and Prince Amukamara. That will remain the same going into 2019. Veteran Buster Skrine will take over the slot position for the departed Bryce Callahan and rookie 6th round pick Duke Shelley should be considered set in place for the #4 spot. This leaves two remaining openings that the coaches have to fill.

There are several corners on the roster but four have stood out as the most likely choices for these two spots. Kevin Toliver, an undrafted free agent in 2018, played as a reserve that year and even started a game. He has more experience than any of the others in this battle. Michael Joseph was another undrafted from last year out fo Dubuque. He has good size and seems to have shown some improvement this preseason.

Then there is the most interesting story of the bunch in John Franklin III. A former QB and wide receiver in college, he converted to cornerback as a rookie in 2018 and spent the year on the practice squad. This offseason he’s shown signs of considerable progress. A player with good size and blazing speed. Last but not least is Clifton Duck. He’s not big or fast but his instinct and ballhawk skills are the best of the bunch as he prove in New York.