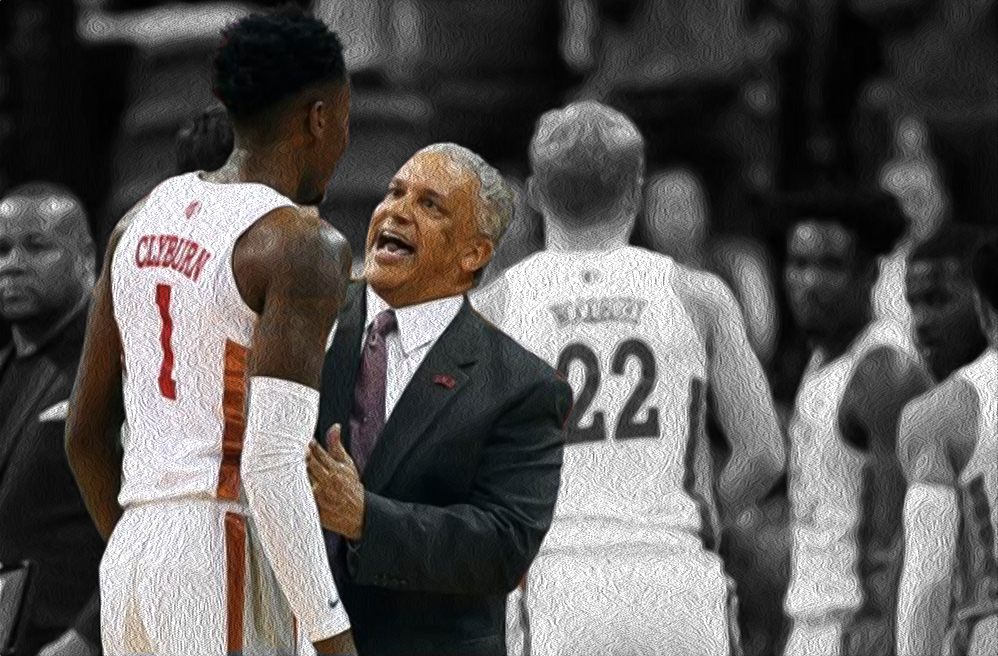 Heading into Saturday afternoon’s crucial road tilt at Utah State, UNLV’s basketball team faced its next major test. After two consecutive losses, the Rebels were looking to right the ship and head home with a 2-2 record in the toughest six-game stretch of the season. If head coach Marvin Menzies is going to get his young Rebels back on track, Saturday’s dogfight was the moment and his most important ammunition in this fight was fueled by a reliance on upperclassmen leadership.

The questions regarding the young team’s progress (UNLV has 11 underclassmen on the roster and just three upperclassmen) were set to be answered in Logan’s Dee Glen Smith Spectrum, and they most certainly were: UNLV’s upperclassmen fired blanks and the Rebels were blown out, 82-56, by Utah State.

“They’re giving me some effort,” Menzies said after the loss. “They are playing hard. They are trying to fight. However, we’re making too many mental errors and too many miscues. There’s just a lot of immaturity in that realm defensively that we need to fix. They have to be connected as five guys defensively and quite often we’re not.”

Translation: There is ZERO leadership from the “experienced” upperclassmen.

Seniors Kris Clyburn and Noah Robotham couldn’t even defend a flaccid broomstick and junior Nic Blair attempted to one-up them both after fouling out in just 10 minutes of play. At one point, Clyburn was even spotted happily smiling on the court with UNLV trailing 16 late in the first half. Not long after, the senior air-balled a jumper with a man in his face then immediately allowed his man to slip past him for an easy fast break layup.

For someone getting their ass kicked in their final year of competitive basketball, smiling while getting boat-raced is a bad look. More than a few UNLV fans took issue — especially me.

Kris Clyburn smiling and laughing, down 16, after scoring a meaningless lucky bucket on a bad look after a fast break layup score and one possession after he was a spectator on defense bothers me. Nothing to smile at when you're down 16, SENIOR. #UNLVmbb

For the third time in three games, UNLV’s porous defense allowed 82 points or more. Menzies, whose hot seat got even warmer after this one, believes much of it has to do with a lack of on-floor maturity.

UNLV allowed Utah State to shoot 49% and 43% from 3. Marvin Menzies says the effort is there on defense, but they're not playing D as a five-man unit right now. pic.twitter.com/Wq4CLtomAr

While there’s plenty of blame to pass around in this one — from coaching staff lineup choices, to shot selection, to overall team effort — it starts with the guys expected to show these young players how it’s done on the floor. Instead, all three upperclassmen were more of the problem than they were solution.

The upperclassmen combined to shoot 6-of-24 in the loss. Clyburn took 30 percent of UNLV’s shots in this one, hitting 5-of-13 with two that were lucky to even go in. Robotham was 1-for-7 with three points, five assists and three turnovers, while Blair was 0-for-4 before fouling out with 12:18 to go in the game after turning the ball over. Worse, Robotham’s defensive assignment, Sam Merrill, scored 20 points with five assists and three rebounds.

The loss of its top player, senior Shakur Juiston, in December really affected the dynamic of the team. When junior Cheickna Dembele went out at the same time, UNLV was forced to rely on small lineups and — specifically — rely on Clyburn and Robotham to run the show. While they have had stretches of solid play, the biggest moments have exposed them for being what they are: role players, not go-to scorers and leaders.

Most fans would probably be able to accept the roller coaster of performance, IF it were the result of a youth movement. Watching the seniors go out there and simply flail around like a newborn baby coming out of the womb isn’t acceptable to most.

To add to the struggle, UNLV’s top three underclassmen, Joel Ntambwe, Amauri Hardy and Cheikh Mbacke Diong, scored a combined 41 points on 14-of-27 shooting. With the upperclassmen shooting so poorly, one would think the older, more mature players would try to feed them the ball. Nope. Instead, it’s more of the same with the seniors, forcing bad shots and missing easy layups.

And, now, to make matters worse, there seems to be a divide in the locker room between the older players and their younger teammates. Robotham even threw some shade at the young pups.

Noah Robotham didn't sound thrilled about UNLV's response to the hard pick that leveled him in the backcourt late in the game, but said it can be a learning experience for the younger players. pic.twitter.com/hfjNhnDg9e

Doesn’t sound like a senior leader in touch with his fellow teammates.

Whatever the disconnect is, UNLV doesn’t have much time to right the ship. The vultures are rightfully circling and, if Menzies wants to get his shot at seeing his program plan come to full fruition, something has gotta change. Nothing he’s done the past two weeks has proven he is on the right track and the cries for Rick Pitino will only grow louder with every poor performance.

Assuming CMM’s time is coming to an end at #UNLVmbb, I hope y’all are right about this Pitino thing! Because if you’re wrong and Pitino isn’t coming to “save this program”, it’s only gonna result in even more disgruntled fans and even lower attendance. #JustSaying🤷🏾‍♂️

Menzies has to be fired. I don’t want to hear anymore of him pathetic excuses on your show. Absolutely disgusting to get thoroughly destroyed by another MW team. And that’s 3 in a row and the 4th will be next.

Menzies has had three years to destroy unlv, enough already. He has set the program back 30 years! Getting destroyed by MW teams is completely unacceptable on any level. Since he completely failed he should resign but obviously he won’t