It was a phrase no hockey expert or fan outside of Las Vegas expected to hear: “The Vegas Golden Knights, are heading to the Stanley Cup Final!” As broadcaster Kenny Albert for NBC Sports proclaimed such great tidings, and as a shocked world of sports watched this team put together less than a year ago, the Golden Knights celebrated (and touched) the Clarence S. Campbell Bowl on the ice in Winnipeg. While their ultimate goal of winning the Stanley Cup fell short, 2018 was a year that no Vegas fan will ever forget.

As the 2018  rang in one year ago, the Golden Knights sat at the top of the Pacific Division. Already surpassing every expectation, critics were still saying “They’re going to fall off eventually.” Opening the second half of the season at home on Jan. 2 against the eventual President’s trophy winning Nashville Predators, the Knights blanked them, 3-0. You got the feeling that the Knights were a team of destiny.

Never losing three games in a row in regulation, the Knights marched on to win the Pacific Division, a feat nobody expected, even here in Sin City.

Wait a minute, the Knights have to open against Jonathan Quick and the LA Kings to start the playoffs? Well, it was a fun run Vegas. This was of course what all the pundits and analysts were saying. Nobody believed in Vegas, yet again.

Take a step back and think about this: We are talking about a first-year expansion team from las vegas in the playoffs!

Here comes the ‘greatest show on ice,’ before and after the puck drops

Defeating the LA Kings, 1-0 in Game 1, and 2-1 in double overtime in Game 2, the Golden Knights picked up their first-ever playoff series with a dominating sweep of their rivals four hours west.

As a Las Vegas local, I have been waiting my whole life to watch playoff hockey in Las Vegas. That Game 2 win in double overtime was the best game I have ever seen in my life, with a close second being the first ever home game in Vegas Oct. 10, 2017. Watch parties outside T-Mobile Arena and at the downtown events center, the whole city buzzing about the Knights, stores giving discounts for wearing VGK gear, the list goes on and on. Only in Vegas could you get discounts for playing bingo by wearing VGK gear on game days. The city took it to another level with their fandom, and the Knights took their game to a new level.

The Golden Knights go shark hunting in Round 2

The Golden Knights’ next test matched their own style, speed and strength with potent goal scoring as they faced the San Jose Sharks. After only scoring seven goals in four games to beat the Kings, many pundits doubted the VGK had enough offense to keep up with a team like the Sharks. Once again, they were wrong.

The Knights took out San Jose in a 7-0 slaughter. The Knights were too quick, and they smelled blood in the water. San Jose gave Vegas a tough test, but the VGK ended the Sharks hopes of capturing their first Stanley Cup to an end as Marc-Andre Fleury hooked them dry in six games.

Marc-Andre was well on his way to winning the Conn Smythe trophy. Posting a remarkable four shutout victories in the first two series, he was playing arguably the best hockey of his career. 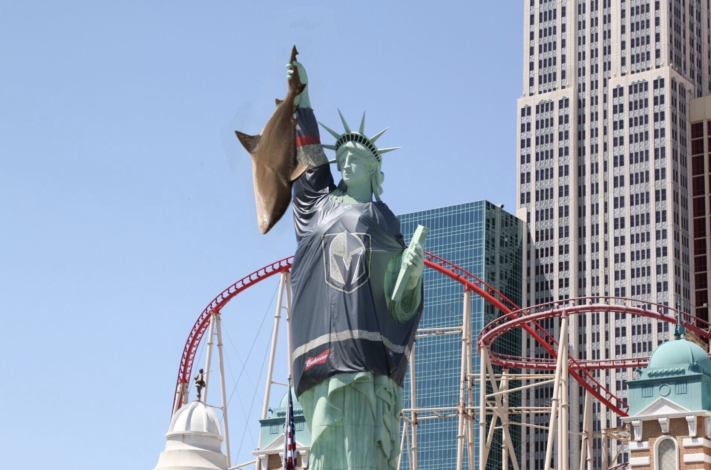 The Knights become kings of the Western Conference

Then came the test of the “True North,” the Winnipeg Jets. The last two expansion teams to come into the league played in the Western Conference final. Their emphatic fans were loud from the start and would be a tough environment to play in for most teams, but not as much for the Knights. After losing the first game of the series, people were saying the Knights Cinderella story is coming to an end.

The remarkable theme of the whole 2018 season for the Knights is as soon as people began to doubt them, they elevated their play to a new level. They proceeded to win the next four games, cementing their spot in history as Western conference champions and earning a berth in the Stanley Cup Finals in their first season of existence. 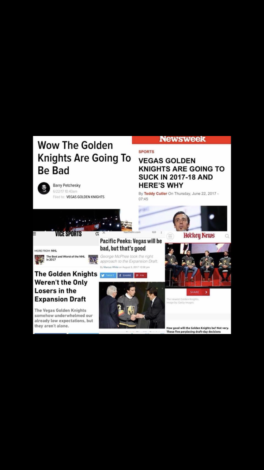 Now, if anyone predicted that the Golden Knights would make it to the Stanley Cup Final, go be their best friend because they’re probably lots of fun to be around at the roulette table. Proving haters wrong is what Vegas has been doing since the inception of Vegas getting a hockey team.

First it was “hockey won’t work in the desert.” Vegas finished fourth in attendance percentage at 103.9%, which is including standing room only tickets. Then, it was “The Golden Knights weren’t the only losers in the expansion draft.” Yeah, George McPhee and Bill Foley schooling everyone by taking a combination of rookies, guys who have been in the league but haven’t played top minutes, and veterans to build a competitive club really proved to be they were losers at the draft.

Wait, what about their hot start? They only played teams that sucked. Nope, by the All-Star break, the Knights were still in first. All year long people were doubting Vegas, both the city and the team, and we kept proving them wrong. Though the VGK ultimately fell short of their goal, it was a remarkable year filled mostly with cheer and celebration.

Round 2 has been a roller coaster for the VGK

The departure of key players such as James Neal and David Perron led people to believe that VGK’s scoring will take a big hit this season. With the acquisitions of Paul Statsny and Max Pacioretty, those doubts were erased, at least for the time being. It has not been a magical start to the 2018-2019 season for VGK. Starting 1-4, the sophomore slump stories started to trickle in. After being at or below .500 for most of the year, there were a couple of memorable games that started to turn the tide for the Knights.

Vegas just got done playing a miserable road trip, losing three out of four games, and lost Erik Haula to a long-term injury. Vegas was near the bottom in the Pacific standings, though luckily for them, the Pacific Division has been largely mediocre for most of the season. So, the VGK still remained in striking distance, and they beat the Ducks in a pounding, 5-0. A quality divisional win go them going as they won seven of their next nine games.

A rematch of the Stanley Cup Final, it was the Caps’ first trip back to T-Mobile. A game that had playoff feel to it, the Golden Knights were fired up after Ryan Reaves decked the least-liked player in the league, Tom Wilson. From there, the game changed. With a tie game at 3 with a minute and a half to go, former Capital Nate Schmidt sped by two defenders and fired a shot past goaltender Brayden Holtby. I have never heard T-Mobile Arena erupt louder. A rivalry is born…

As the 2018 year comes to an end, and with about a half a season to play, the VGK sit in the third playoff spot in the division, only three points out of first place. Vegas is looking better as the year goes on, and for the most part, are getting healthier.