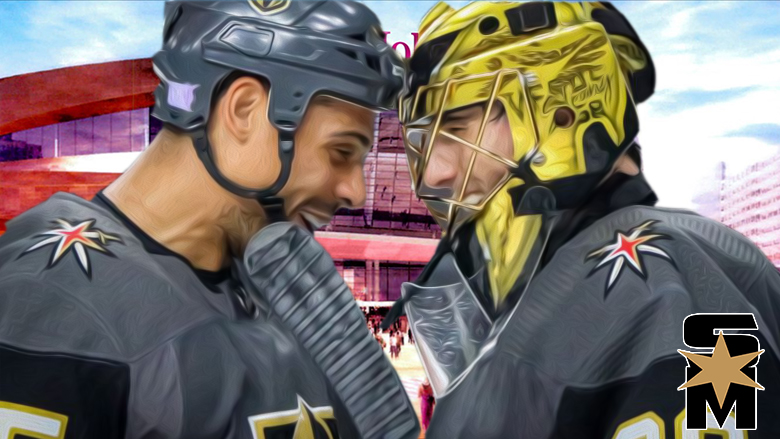 It was not a week the Golden Knights and their fans would like to remember. A 1-3 record, losing Erik Haula for a possible season ending knee injury, and an unsettling repetition of what has sunk the Knights all season long when they have played poorly is looming over the team. Despite the road trip adversity, the Golden Knights returned home Wednesday night, dominating Anaheim, 5-0, to shed a large layer of negativity.

Before the win, the Golden Knights had a 7-9-1 record, and were seven points back of the Vancouver Canucks for first place in the Pacific. Cody Eakin scored his sixth and seventh goals of the season, Marc-Andre Fleury stopped 29 shots for his third shutout, and the defense held true in the vital league win.

Eakin’s scoring frenzy is a nice positive in the Knight’s sophomore season, which has been marred by injury, suspension and inconsistency.

“I don’t know what it is, just having fun, I think that’s important, to play the game, enjoy it and have fun,” said Eakin, whose career high is 19 goals but is currently on pace to score 38. “The pucks are going in right now, there will be times when they aren’t, but I’m going to try and ride it.”

Golden Knights head coach, Girard Gallant was happy with the team’s effort in such a pivotal game this early in the season.

“They know tonight was a big hockey game for our group,” Gallant said. “I thought we played our game tonight. I thought we worked really hard defensively, we did a lot of good things in the D zone, and that started our offense. Guys went to the net and they scored some nice goals tonight. Hopefully we got a little bit of our mojo back.”

While the Golden Knights finally seemed to get their mojo back, it wasn’t all puppy dogs and ice cream when the team returned home from its recent nightmare road trip. After winning just one of the four games on the road trip, things looked bleak for the defending Western Conference champs.

Let’s take a look back at how they panned out this last week on the road.

After losing a heartbreaker of a game to Montreal the night before, the Knights were faced with the dreaded back-to-back games in Beantown. The Bruins went into the game with the best goal differential in the league at 5v5 play. The Knights? Well…they went into the game dead last in that category. Vegas got stuck in the mud out of the gate, giving up a goal not even three minutes into the game.

An all too familiar theme of a cross-ice pass that a Vegas D-Men failed to block, thus leaving the goalie out to dry for a wide open goal. The Bruins would then get lucky as a dump-in pass from center ice takes a hard, but true bounce off the end boards. Goaltender Malcomb Subban attempted to go out and play the puck in front of his net, but the hard bounce took him by surprise, and the puck was already out of his reach, leaving the B’s for an easy goal. Eakin’s loan goal of the game after a power move to the inside by Alex Tuch was one of the few bright sports of the game, as Vegas loses 4-1.

Overall, a very frustrating game by the Knights, but they didn’t give up.

🎥 Bellemare: We just need to stick together and keep battling. pic.twitter.com/eH29QpOVAd

This game was the epitome of a tale of two teams for the Knights. The first period, the Knights looked quick, won puck battles, a power-play goal, and out shot “Le Habs” 15-4. On the road with a two-goal lead is all you can ask for as a coach. But, then, VGK took their foot off the gas pedal. Montreal scored three straight goals in the second period, and all of the momentum the Knights built in the first period was quickly washed away.

The Knights went back to eventually take a 4-3 lead with goals from Tuch and William Karlsson, but Montreal answers with a goal from Andrew Shaw and a late goal from of all people, Tomas Tatar, sends Habs fans home happy. Hand to face emoji would be appropriate right now. Final score, 5-4 Montreal. Despite a gut-wrenching loss, the team is remaining optimistic.

🎥 Hunt: We've got to take the positives, learn from the mistakes and move on to next game now. pic.twitter.com/YQ4o2XRObN

That all too familiar feeling of giving up leads resurfaced in this offensive juggernaut of a game with the Senators. The VGK dominated out of the gate, getting two power-play goals from an anemic power play bunch surely was a confidence boost for the whole team — a power play unit that ranks almost dead last in the NHL.

A late goal in the second period from a nifty move from Nick Holden (of all people) beats two Ottawa players and jams home a shot beating goaltender Craig Anderson. A 3-0 lead on the road late in the second, should be a relatively uneventful rest of the game, right? Unfortunately, the Knights did not make it easy on themselves.

A goal thirty seconds later from Matt Duchene gave Ottawa some hope, as the Knights carried a two goal lead into the third. Ottawa would eventually tie it up. A once three-goal lead was now tied at three, but the VGK fourth line said enough is enough. William Carrier would tally his second goal of the night on a highlight real backhander. Then, a controversial goal by Pierre-Edouard Bellemare made it 5-3 Knights. A goaltender interference call ruled in favor of the Knights? That’s something we don’t see too often, but we’ll take it.

The Knights escape with a victory 5-3 in Canada’s Capital.

This was a game VGK fans, especially forward Erik Haula, would like to forget. What was particularly frustrating with this game was that Vegas, for the most part, played a really smooth game.

“We played good,” Marc-Andre Fleury said after the game. “We had the puck a lot and controlled the play a lot.” Then Flower said a statement that kind of summarizes VGK’s season in a nutshell so far, “A lot of games, I feel we are so close in the game, but we can’t seem to get the win to get the two points. It’s frustrating but we have to keep on working. It’s going to come.”

Toronto got thee first two goals of the game, one coming from a turnover by Nick Holden, the other coming from the incredible playmaking ability that Toronto forward John Tavares has. Halfway through the game Vegas was down 2-0, but significantly outnumbered Toronto in shots on goal and scoring chances. They just weren’t going in the net, credit goaltender Frederik Andersen for a stellar game. Cody Eakin would finally breakthrough midway into the second period, but an empty net goal from Toronto late in the game sunk the Knights by the score 3-1.

Worst part of it all wasn’t even in the loss, it was the hit VGK forward Erik Haula sustained an injury where he needed to be stretchered off the ice after a clean hit from veteran Patrick Marleau.

Haula would not return to the game, and with the little information out of the VGK camp since the injury, people fear Haula suffered a season-ending injury. It is important to note that Haula stayed with the team for the remainder of the road trip.

Erik Haula in significant pain after being crushed along the boards by Marleau. pic.twitter.com/m8w8aRjm1E

Where do the Golden Knights go from here?

For all of the negativity of the road trip, there are some positives to take away. First thing is the “fourth” line, of Reaves, Bellemare, and Carrier are giving the Knights much needed energy and producing on the scoreboard as well. Pretty much single-handedly winning the game in Ottawa, the fourth line is giving other teams fits, which is important to the lack of depth scoring on the Knights so far this season.

Jonathan Marchessault is turning into, if he wasn’t already, an absolute superstar. His leadership both on and off the ice is reflecting and resonating around the locker room. Now with a team-leading eight goals on the season, demanding more from the team, and talking about needing a complete 60-minute effort to win games, we could be looking at the future VGK captain. After the loss in Montreal, Marchy was quoted saying “We need a full effort from everyone. It can’t just be Belle’s (Bellemare) line, or Flower, it has to be everyone working hard.”

Lastly, home-sweet-home, right? The previous two road trips for VGK, when they returned home, they played arguably their best games of the season (Buffalo on Oct. 16 and Carolina Nov. 3). The team is finding success at home as of late, winning five of their last seven at the Fortress.

Vegas is only sixpoints out of first place. I do not believe there are “must-win” games in November. The Knights, as underperformed as they have, are still within prime striking distance to take control of the Pacific division. With Nate Schmidt returning against Edmonton this week, they will gain the most important piece arguably to the VGK blue line, which has been abysmal this season.

Still, with more than 60 games left to play in the season, Vegas more than enough time to correct their inconsistency. After all, the Washington Capitals last season finished October 5-6-1, and we all know how that turned out for them. Vegas’s record after October this season? 5-6-1.