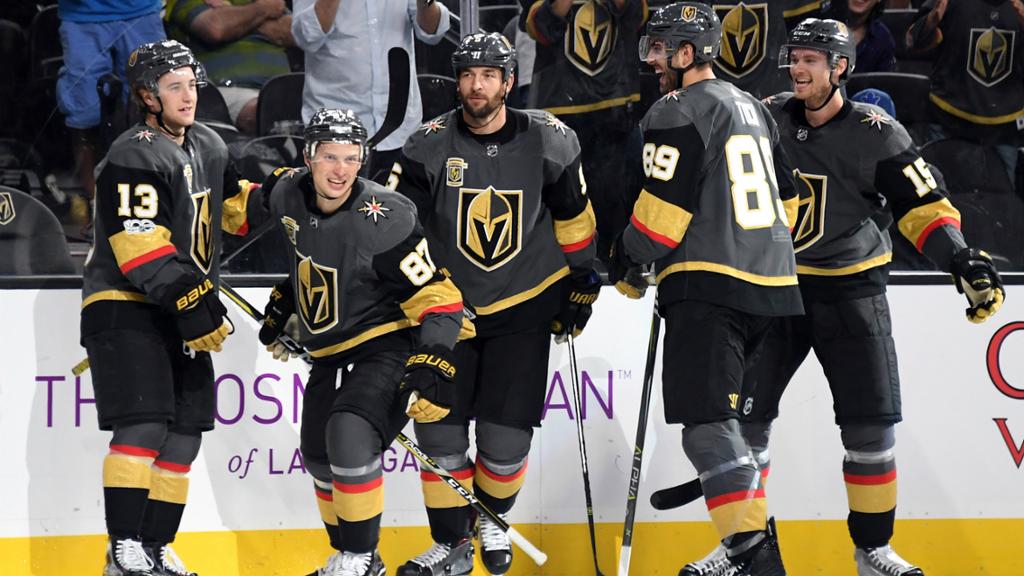 The Golden Knights had fun playing hockey Tuesday night back in the Fortress after an abysmal road trip. A solid effort from all four lines, Marc-Andre Fluery playing like his normal self, and good special teams all made an impact for the Knights best game of the season. The Knights used that magic to upend the Buffalo Sabres, 4-1, and now prepare for a Saturday Showdown with the first place Anaheim Mighty Ducks.

A well-documented critique of the Knights has been their inability to score early and hold a lead. Coming into the game Tuesday night, the Knights have scored first three of the six games, but forfeited the lead in the same period that they scored.

That wasn’t the case against the Sabres, who beat Vegas in Buffalo just eight days prior. Vegas finally cashed in on the power play in the first period after going 0-16 to start the season. To get the Knights on the board, Jonathan Marchessault snapped a wrist shot after a beauty of a pass from William Karlsson. The play developed after a good zone entry from  Karlsson, Reilly Smith feeds the puck back to Karlsson who quickly found Marchessault streaking down the center of the ice, and roofed one top shelf.

About 10 minutes into the game, Shea Theodore skated right through defenders left and right, and finished a goal off with a nifty toe-drag. However, that all to familiar feeling that the Golden Knights have experienced this year of luck not going their way happened again. The goal was ruled offsides on Max Pacioretty, and then VGK took a penalty shortly after the no-goal call.

Vegas could have very easily let Buffalo right back in the game after that. The players and coaching staff all knew it was offsides though, so they quickly forgot about it and focused on making the next play.

Coach Gallant said after the game when asked about it, “We knew right away the goal was offside as soon as we looked down. It wasn’t a big deal. We knew it was coming.”

The game shifted gears to the top line, and they looked dominant for the whole game, as they combined for seven points collectively. Cody Eakin made use of his time on the third line as he continued his hot hand. After getting control of a lose puck after a Nick Holden penalty, Eakin skated down the ice for a 2-on-1 goal. Eakin is feeling it to start the year and it was obvious after he ripped one past Carter Hutton for a short-handed goal.

Last year, it took Karlsson seven games to score his first goal so it was only fitting Tuesday night’s game was the seventh game of the season for the Knights. Of course Wild Bill scored.

Karlsson's first of the year 🤠 pic.twitter.com/aGvR5g4E2W

People are a little uneasy because he hasn’t put one in the back of the net, but “Wild Bill” now has seven points on the year. Breath out Knights fans, it’s going to be all good. Even Gallant was joking about it after the game.

Gallant: "Good for Karlsson to get one tonight. The next 40 will come easy for him." #VegasBorn

A lot of times, the fourth line doesn’t get enough love because they don’t light up the score sheet. However, they don’t need to. Sure it’s a bonus if they do score, but the line of William Carrier, Pierre-Édouard Bellemare, and Ryan Reaves does exactly what it needs to — they keep the bees off the honey.

Carrier skated around like a man on a mission Tuesday and looks strong headed into Saturday night’s showdown. He collected three hits, but it sure seemed like more. He even had a chance at a partial breakaway. Ryan Reaves had five hits, and had several scoring chances. VGK radio host Gary Lawless said during the radio broadcast, “Reaves could have eight goals already this year.”

Reaves’s positioning in front of the net, battling for position, and his use of his stick to tip pucks is providing some trouble for other team’s fourth liners. Bellemare is a reliable center who Gallant uses frequently on the penalty kill, who also had a short handed goal back on the first game of the season. If the Knights keep getting this consistent, physical play without taking penalties, it’s going to open up the ice for the rest of the team.

Not lost in the fray of the game was Marc-Andre Fleury moved into Top 10 all-time in wins for a goaltender. What a treat for the Halloween season!

The Knights played an overall solid game. They scored more than two goals for the first time this season. They didn’t leave Fleury out to dry and allowed him to have consistent chances at making saves, rather than worrying about multiple cross ice one-timers every game. Gallant was pleased with the effort after the game.

Gallant on #VegasBorn effort tonight: "I've seen a lot of things that we have to do for the rest of the year."

They will look to continue this momentum and start a winning streak when they face the pacific division leading, Anaheim Ducks. The Ducks are coming off a 4-1 home win over the New York Islanders Wednesday night and are sitting atop the Western Conference at 5-1-1.

The Ducks are led by Jakob Silfverberg and Hampus Lindholm, who have seven total points apiece this season. Their only loss was to Arizona last week. They are the front-runner to win the Pacific Division.

Puck drop is scheduled for Saturday night at 7 p.m. at T-Mobile Arena. The event is expected to be sold out, and push attendance records once again.