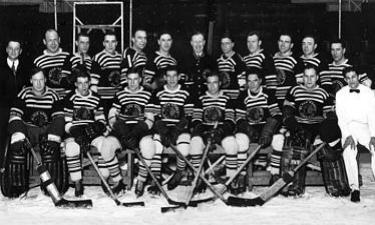 For months fans have speculated on what the Blackhawks jerseys would look like for the Winter Classic at Notre Dame Stadium. In previous appearances they’ve worn what would be considered throwback looks. Based on their teaser video this morning it looks like they’ll be doing that again.

in the video they show photos of the jerseys worn at the inception of the franchise circa 1926. At that time the Blackhawks wore a simple color scheme of black and white.

I personally have been asking for these jerseys for a long time. Not that they actually listened to me. The stripe laden jerseys were very popular in the era and are very clean looking.

Since they only teased the below it will be interesting to see how far they stray from the originals, if at all.

Here’s an exclusive look at the logo we’ll proudly wear in the #WinterClassic! pic.twitter.com/PtlVmO7avY

Based on the #Blackhawks teaser this morning it sure looks like they’re going to wear something like this in the #WinterClassic
👍🏼👍🏼 pic.twitter.com/XHBPpIExPn