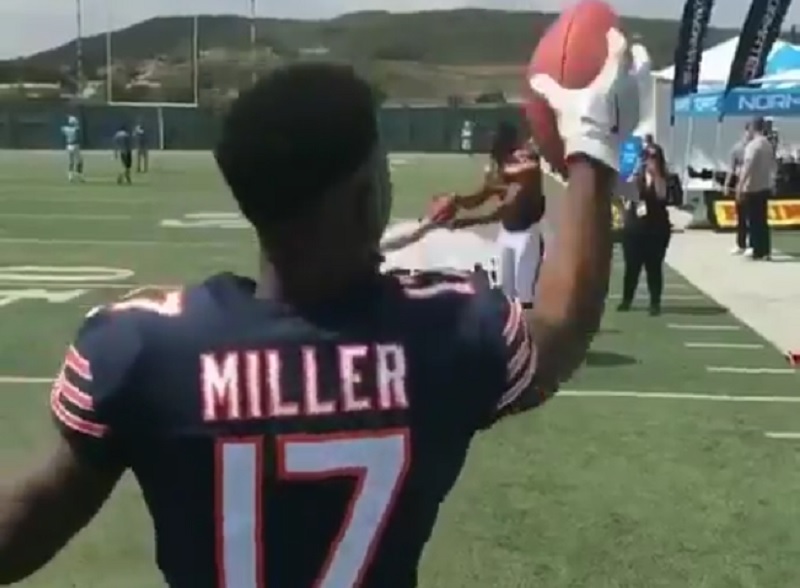 Why did Anthony Miller fall to the second round of the NFL draft? This is a question experts pondered. His production seemed to warrant first round consideration. So for him to fall would need some key concerns. Among the most referenced was his slightly older-than-average age. He turns 24 in October. The others were being undersized at 5’11” and coming from a smaller program at Memphis.

Except those weren’t all. There was also a strong push from other source indicating another issue:  unreliable hands. In fact, Lance Zierlein of NFL.com referenced that exact problem in his scouting report about Miller before the draft.

“His inconsistent hands are definitely a concern, but his ability to get open and to work all three levels of the field increase his chances for success as a WR3.”

He cited issues with five career fumbles in college and the occasional double catches he’d make. Is this true? Did the Bears trade a second round pick to go up and get an undersized, overaged receiver with unreliable hands? No. Per usual it turns out the prevailing theory is wrong.

Anthony Miller has better hands than most receivers in the draft

With situations like this, it’s always about context. People can watch some tape, see him bobble a pass or have the occasional fumble and immediately proclaim he has bad hands. Yet people aren’t taking into account how often Miller is touching the ball. Last season he touched the ball 106 times including 96 catches. That’s a lot for a wide receiver.

It goes beyond that though. Here is a snippet from NCAAsavant.com. In it, they tracked every wide receiver in college football and pinpointed how many times one was targeted vs. how many catches they had. This is based on all the games where play-by-play data was made available.

It’s pretty revealing. Here’s Miller compared to every receiver drafted ahead of him.

Despite being the third-most targeted receiver on the list, Miller had the second-best catch rate among the receivers. The only one who beat him out, Dante Pettis, made it by barely .51% and was targeted 21 fewer times. Suffice to say Miller did his job catching the football more so than most of the others did.

This is why people should be careful about taking the experts at their word. It’s quite possible they didn’t dig a little deeper into the details to find out if certain aspects are true or if they happened to miss something. Long story short? Miller is going to be a solid player in Chicago.