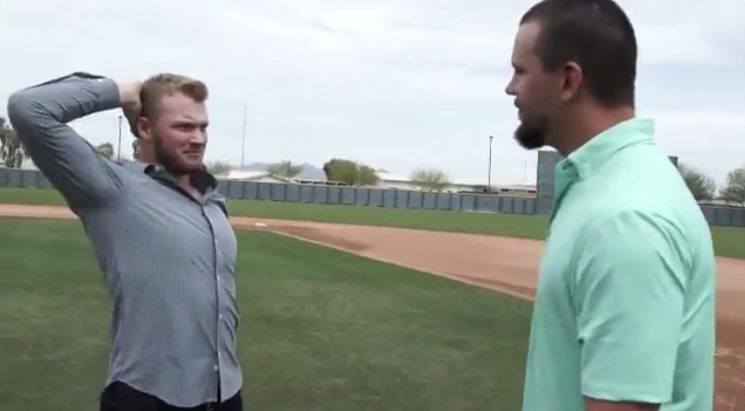 Ian Happ and Kyle Schwarber both went yard today during the Cubs 8-4 win over the Miami Marlins. Happ became the first player in over 30 years to take the first pitch of the season deep since Dwight Clark did it off Jack Morris all the way back in 1986.

Schwarber made up for some serious fielding blunders by taking the soul out of a baseball in the top of the 7th inning to extend the Cubs lead to 6-4 at that point. I’d also like to note that Schwarber has the first official “pimp job” of the 2018 season with that majestic stare. He had to stare at it because the pitcher didn’t even bother turning around to watch the ball sail over the fence.

Has a rough day in the field and then does something like this… and TOTALLY REDEEMS HIMSELF! #Cubs pic.twitter.com/2A8MbFrp1E

The two recently starred in a commercial for Mizzen + Main, which is a men’s clothing company who prides itself on creating the most comfortable dress shirts in the business.

“WHY ARE THESE SHIRTS SO COMFORTABLE AF?

The two Cubs, who are spokesmen for the company, co-starred in a pretty funny commercial which almost has a “Step Brothers” vibe to it. Either way, it’s pretty funny to actually see Ian Happ have fun and not look like he wants to murder a litter of kittens.