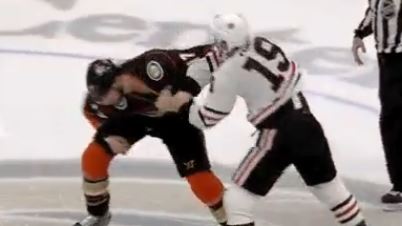 Jonathan Toews taking on Ryan Kesler at center ice to start the second period today was the most fight we’ve seen out of the Blackhawks in weeks. Their dislike for each other has been well-documented over the years and you’d expect a brawl, but this was as staged as a WWE event.

Staged fights are pretty much the norm in the NHL these days but both of them were really holding back on the punches. You know Toews, as the leader he is, really wanted to fire up the boys but it was hard to take this fight seriously.

I would have loved to see him come out and do this some time ago when there was a chance to make the playoffs. I know the Ducks are holding on to that last wild card spot in the west but it’s a little late now and I’m just happy Toews didn’t get knocked out.

Ryan Kesler and Jonathan Toews drop the gloves off the faceoff pic.twitter.com/x5Ooq6ZTnJ