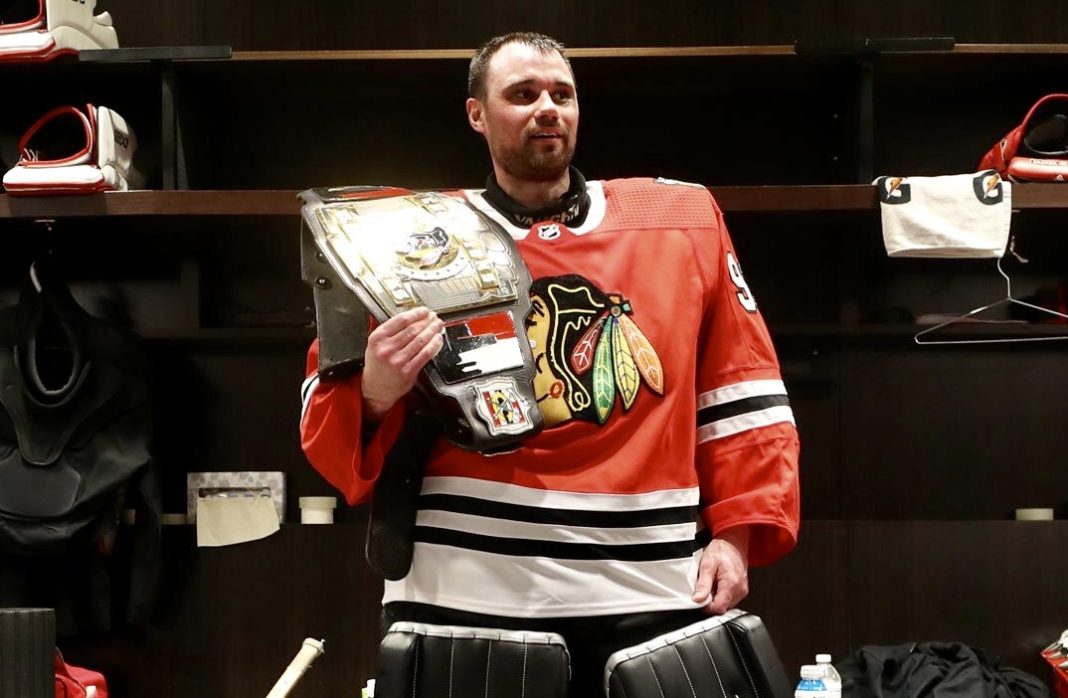 Scott Foster had a dream come true on Thursday night when he was called up to the NHL from the beer league. The call to the Blackhawks is a huge step up from 11pm games on a Tuesday night in front of maybe one guy’s new girlfriend.

The 36 year old is an accountant by trade and the last time he played a truly meaningful game was at Western Michigan University over a decade ago. He is part of a group of goalies that rotate as potential emergency goalies for the Blackhawks.

He was on his way to the United Center when he got the call that Anton Forsberg got hurt. Foster would be dressing and sitting on the Blackhawks bench tonight wearing number 90.

in situations like these the emergency goalie like Foster normally don’t get into the game. That all changed when Blackhawks goaltender Collin Delia cramped up with 14:01 remaining in the third period.

With no warmups he was thrusted into play against an  explosive Jets offense who were playing from behind. The dream could have turned into a nightmare very quickly but Foster turned away all 7 shots he faced.

He is now the NHL’s all-time leader in save percentage.

“It happened pretty quickly” he said. That’s for sure. When he woke up that morning he had no idea he would get the call, dress for the game and then play.

The best is that this all unfolded in front of 21,000 fans and their cheers would grow louder with each save. They even began to chant FOS-TER FOS-TER!

Foster would end the game being mobbed by the whole team, earning first star of the game and getting the belt from the boys in the dressing room.

When asked about what his family thought, he said his two children were probably sleeping and “My wife, she’s also home. I don’t know if she knows about this or not.”

That’s ok. She’ll hear about this for the rest of her life but at least all the boys at Johnny’s IceHouse were watching.

“Well the initial shock happened when I had to dress, and then I think you just kind of black out after that.”