What started out as just two guys joking around while working out, has quickly morphed into a concept that may take the athletic world by storm in 2017.

Anthony Albano, co-owner of Edge Athletics, sat down to discuss what he sees as the perfect pair of athletic shorts — the 2-in-1 athletic short which implements their provisionally patented Secure Pocket technology.

Albano was born and raised in Chicago’s southwest side, in a neighborhood called Mt. Greenwood, where he attended St. Christina grammar school. After graduating from Brother Rice High School in 2001, he was drafted in the 20th round by the Minnesota Twins, but turned that offer down and instead choose to play four years of Division I baseball at Florida Atlantic University. After college, Albano played professional for four years in the highly-competitive Frontier League which eventually led him to working for the San Francisco Giants as a vision trainer from 2010-11. Having been a part of the organization he was even lucky enough to receive a World Series ring in 2010. He currently lives in Sonoma, California where he is busy raising his family and cheering on his Chicago White Sox.

A Revolutionary Idea Is Born

During his time with the Giants, Albano and founder of Edge Athletics, Ross Golding, were running through drills and they both mentioned how incredibly annoying it was to have your phone and keys in your pocket while working out. Little did he know, that interaction would eventually lead to the idea for the Secure Pocket.

The two immediately thought that it would be extremely useful to design a pair of shorts which addressed this issue. To their surprise, there wasn’t anything on the market that could truly accomplish this. Albano laughed and jokingly said, “we could totally launch them on a Kickstarter!”

Just like that, the idea was born and the two haven’t stopped pursuing their dream ever since.

We just couldn’t let the idea go, and so one day I grabbed a pair of my basic athletic shorts, got my favorite compression shorts and with mesh lined swim trunks in mind, I looked at them and thought I could make a secure pocket by putting the two together. I have a bit of a Tetris mind and I cut, manipulated and incorporated the pocket underneath the compression shorts, and boom, our Secure Pocket was created! The tightness of the compression holsters your phone, and anything else you’d like to put in them,  to your leg while creating a pocket that does not move while being active.

Everyone from an extreme athlete to your Average Joe, Albano believes this truly is the perfect pair of athletic shorts which holsters your phone, keys, wallet and more.

It literally became a bit of an obsession, thinking about all the applications this pocket design has.

Venturing into a Kickstarter campaign is a brand new experience for both Albano and Golding, but since it was launched in 2009, Kickstarter has seen a massive amount of growth and helped millions of people along the way.  In 2015 alone, the company helped fund over 54, 000 projects, pledging an astonishing $692 million. That’s a lot of dimp.

Their campaign hopes to raise $20, 000 in an effort to help them expand by launching an e-commerce site and building a modest inventory to meet the growing demand for their product. As the Edge Athletics grows, so too will the amount of products they offer.

We will start with our Secure Pocket short, then we’d like to expand, adding our unique Secure Pocket technology into any kind of athletic and lifestyle bottoms we can. We’ve already had so much feedback and ideas ranging from yoga, golf and cycling, to sweatpants/loungewear and casual everyday attire, just to name a few. We would like to develop into a full athletic and lifestyle apparel line with innovative, comfortable, fashionable and functional apparel!

The Goal Of The Campaign

Albano stated, that while the campaign funding goal may sound high, they made the choice to have their product 100% made in the USA and with that comes higher costs for both the materials and manufacturing process, while the margins are much smaller. They felt it was important to keep their business local, by whatever means necessary, and without the capital it takes to launch a start up business, they turned to crowdfunding.

The goal of getting funded on Kickstarter is to be able to do a large enough product order of specifically our men and women’s Secure Pocket 2-in-1 athletic short, that we can get our manufacturing costs down and start our e-commerce site.

Our goal for 2017 is to launch our e-commerce website with a modest inventory of our shorts. We will be, and already are, working on getting our Secure Pocket shorts technology into schools, including grade schools, high school and colleges for anything from PE apparel to training wear around the country. We have seen with the increase on our reliance on cellphones and technology, PE teachers, for example, are starting to use apps to track their students fitness. They certainly could benefit from this pocket. Coaches and all sports teams are another avenue we are exploring as literally everyone has their phone on them at all times and could benefit from a secure pocket that will confidently hold their items in place. I can’t tell you how many times when I was vision training with the Giants, I’d run to get a ball and I’d grab my phone in my pocket and hold it in place as I’d run.

Having been born-and-raised in Chicago, we felt it only right that we asked him to provide some personal recollections of what he loves and/or misses the most about the Windy City.

What’s it about Chicago that you love this most?

Besides my family and friends, it’s the community that I love. Growing up in Mt. Greenwood, there was a small town tight-knit community feel with all the accolades of the city just 30 minutes away. And, basements! I miss those the most…oh, and the food! Give me an Italian beef or deep dish pizza any day.

Walking into a Southside bar with my brothers, I’m going to drink Coors Light until it’s time to grab a late night burrito.

What is something that many people might not know about you?

I have a passion for cooking and preparing meals for family gatherings. If ever the opportunity arises, I’d love to open up a food truck serving Italian beef sandwiches out here in Northern California.

Who is your favorite athlete (any sport)?

As big of a baseball family as I came from, you’d think it’d be a baseball player, but my favorite athlete always has been [Michael] Jordan. The excitement and joy he brought to pretty much every kid growing up in Chicago in the 90’s was unforgettable.

When you come home, what bar/restaurant is a must here in Chicago?

Pop’s Italian Beef & Barraco’s Pizza are an absolute go to!

What about the name, Edge Athletics?

That was pretty simple. After explaining our product to a number of people, everyone kept saying, “that is some cutting edge stuff right there.” After hearing that enough times, Ross and I looked at each other and said, “Edge!”

What is your motivation behind the company?

Playing baseball my whole life, basically living and breathing it, I never envisioned I’d do anything else. When I finished my pro ball career I really had to switch gears and start thinking about what I could do and would enjoy doing in life. I still remain very active in the athletic world and of course want to stay there. When these shorts actually became a reality, and with how much I truly believe in these shorts and the pocket design potential, I started to see myself owning my own business and truly being successful, and loving it. It’s a perfect blend of autonomy and innovation while being submerged in athletics.

Excluding yours, what company or business do you admire the most? Model yourself after?

A college teammate and friend of mine started a baseball style apparel company, called 22 Fresh. Kip Simon, the CEO, has done an absolutely awesome job building his fan base and followers as well as creating some amazing products and designs. I feel that if Edge can obtain half the success as 22 Fresh, that would be a big win for us.

What is the future of Edge Athletics?

The future of Edge Athletics is exciting and fairly open, it’s hard to tell which direction it will actually go! We’d like to of course, expand our Edge Athletic Apparel line, with all of the different products we discussed above, eventually becoming a household name, either “Edge” or “Secure Pocket” or both! We spoke about getting our Secure Pocket design into schools, but we are also working on getting our design into as many professional sports outlets as we can. We can see this being especially useful for coaching staffs. In fact, we have already had an offer to put a bid in to outfit an MLB team for spring training, so this would be the pro-athletes and their coaches wearing our pocket design. We’d like to expand on that. We’ve also had several investors approach us wanting to invest at the ground level. We have told them we are not ready to do that yet, as we want to see Edge grow and have a better understanding of the potential value of our product and our brand. We feel the possibilities with Edge and our Secure Pocket short seem limitless and we are excited!

We feel these shorts will quickly become your favorite athletic shorts as you will be confident and comfortable and almost forget you have anything in your pockets at all, thus allowing you to take your day, your actives, your lifestyle- “to the Edge”! 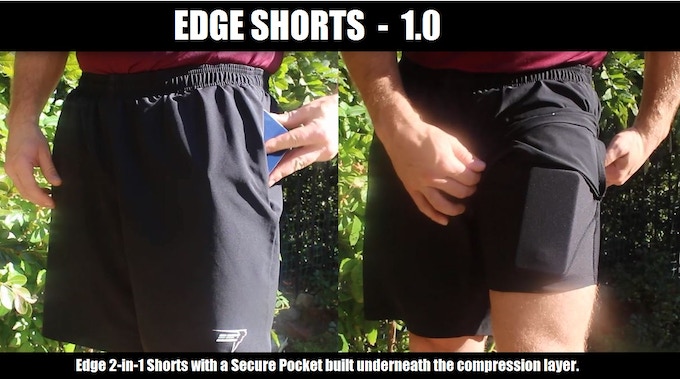 “Win It For Ken Bone” Cubs Tee Shirt Is Awesome