The Blackhawks have virtually worn the same uniform since 1955 with minor changes from time to time. It is hard to improve on a classic look but the organization has been playing in the NHL’s Winter Classic or Stadium Series games a lot recently.

These opportunities have given the Blackhawks a chance to dig deep into the heritage or come up with something new. It should be noted that the NHL wants there to be a different look between the two types of outdoor games. The Winter Classic has a retro feel while the Stadium Series is supposed to be more modern.

This was hard but here is my ranking of the five jerseys the Hawks have chosen to wear in outdoor games.

Clean, classic but this is the Blackhawks chance to look further into their heritage. This looks too much like the current away sweater with a few minor changes.

The most notable differences from the current look are the numbers and tomahawks with the “C.” The numbers are thinner and have no red outline like the current set. In addition to being moved further down the sleeves, onto the stripes, the tomahawks and C’s colors have changed. It is almost the exact copy of their 1957-58 look but with the modern crest. 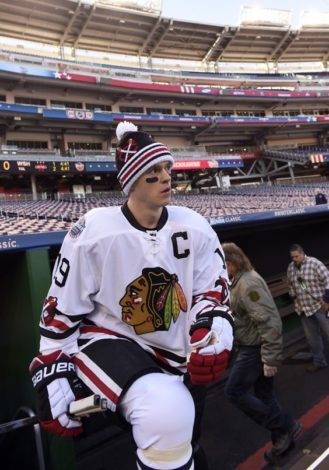