Ken Bone is quite possibly the most interesting man in the world.

If you aren’t aware, this lovable teddy bear was recently presented to the world during the second presidential debate last Sunday night. Labeled as an undecided voter, Bone stood up to present a question to the presidential candidates and left the Internet applauding when it was all said and done.

The man behind the now infamous red sweater asked the following question:

“What steps will your energy policy take to meet our energy needs while at the same time remaining environmentally friendly and minimizing job layoffs?”

The question was stupendous, his name was bad ass and the red cardigan, well that was downright naughty. After the debate concluded, Bone was caught taking pictures with a disposable camera which set the Internet on fire. People are simply in love with his black-rimmed glasses and a smile you can’t say no to. 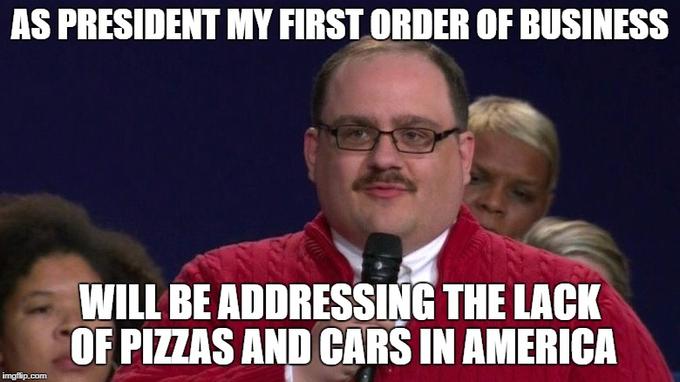 Bone gained over 30, 000 Twitter followers instantly and is now the Internet’s new sweetheart. Kinda like Harambe, but still alive.

Cubs fans can now part take in the fun wearing this “Win it for Ken Bone” tee created by Urban Gameday.

If you looked at that and didn’t laugh, you likely don’t have a soul.

Since its release just a few short days ago, the shirt has already had to be restocked three times. The Internet, and Cubs fans, have an undying love for America’s new voice.

Here’s a few more Bone memes to keep you in the mood.