In case you’ve never heard the “rumor” before, there is strong evidence that indicates Aaron Rodgers could be gay. Now, most people probably wouldn’t even care if he was, but the length at which he is attempting to deny it is very strange.

According to recent reports from TerezOwens.com, Rodgers has completely cut ties with his family members, all of them. His brother Jordan, who is currently on the hit TV show The Bachelorette, confirmed these rumors when he told the world that he and his brother aren’t on speaking terms.

“Me and Aaron don’t really have that much of a relationship. It’s just kinda the way he’s chosen to do life, and ugh, I chose to stay close to my family, my parents and my brother (Luke). Yeah, it’s not ideal. You know, I can’t imagine what it’s like to be in his shoes, the pressure you have.” – Jordan Rodgers

Owens, citing an inside source, says the problems with the family come from two main issues: Rodgers’ parents routinely stepping over their bounds and “the Kevin Incident.”

“It’s all related because the timing of everything. His parents are huge fans of him and very proud, rightfully so. They would tell him they are coming out to visit instead of asking if they can come out. That’s fine for awhile but it wore on him. The frustration built up and came out in a bad way. The story about Olivia keeping them out of his box is true.”

The base of the rumors started when Rodgers told the media he had a male roommate back in 2008, Kevin Lanflisi. Lanflisi was reportedly Rodgers’ assistant, roommate and according to strong rumors his lover. This quote got a lot of attention, from that same ’08 interview.

“Our friendship goes a lot deeper than we do.”

Here’s a video of Rodgers talking affectionately of Lanflisi and the two at a banquet where Rodgers receives his MVP award. It also shows off a ton of tweets that were previously deleted.

According to FameDriven.com, the two had a “falling out” after they had agreed to join a group of NFL players prepping to come out as gay over the summer. Then, 30-year-old Aaron backed out.

Over the years, Kevin has posted many pictures of Rodgers to social media.

Again, most of this was simply rumors but ended up going a lot deeper. Many people believe that Rodgers has cut ties with his family to prevent any more information about his personal life getting out. Owens’ source indicates that Rodgers had his family, and everyone else close to him, sign non-disclosure agreements as well.

This prevents them from ever talking about Rodgers publicly.

Many news outlets are starting to believe there’s a serious publicity stunt going on to try and continue to convince the public Rodgers really isn’t gay. It’s now been going on for years.

“Two days after Aaron Rodgers’ younger brother, Jordan Rodgers, publicly addressed his strained relationship with his superstar sibling on The Bachelorette, the Green Bay Packers Quarterback stepped out with girlfriend Olivia Munn in Los Angeles on Wednesday, and the cute couple couldn’t have looked happier.”

More innuendo to believe the relationship with Munn is simply a PR stunt.

Munn spoke about the couple’s sex life back in December of 2014, and her comments only added more speculation.

(When asked if they have sex on game day)

“No, we don’t, ” she said. “Not on game day. There’s not a rule, but it just doesn’t happen because there are other things to focus on.”

However, Munn said they occasionally have sex after Packers games.

Those quotes aren’t any evidence Rodgers is gay, but when you’re dating one of the sexiest women in the world….

Owens has written several different reports on this subject, and also spoken to several different insiders that appear to have knowledge on the situation, here’s what he told us about his opinion on the matter.

“I think if anything he’s bi, had a boyfriend (allegedly) now he’s with a woman. Hard to say what really went down with his assistant”

Rodgers has denied being gay in the past, specifically on 540 WAUK-AM in Milwaukee.

That could very well be true, few believe it but it could be true, however he has likely had sexual relations with men before. 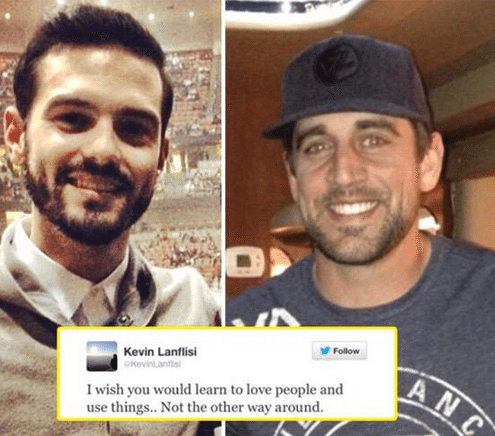 Rodgers does a great job hiding his personal life from the public and always seems to make opportune appearances with Munn when people question his sexual preference. That has apparently costed him his relationship with his family, or it’s at least part of it.

No matter how strong of a person you are, you will only get so far without the love and support of your family. Let’s hope Rodgers can get this situation figured out.

Hell, it’s 2016, being gay is like the new cool thing. Most would probably respect his decision to be honest rather than chase this trail of suspicion.