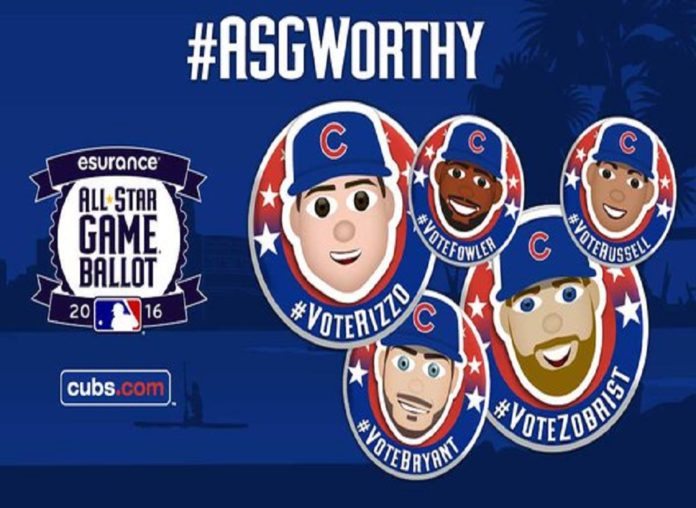 Anthony Rizzo not only leads the vote at first base, but actually leads all National League players with nearly 875, 000 votes, which is approximately 36, 000 more than reigning NL MVP, Bryce Harper. Despite his .236 average, Rizzo ranks second among first baseman in home runs with 11 and owns the most runs batted in with 37.

Cubs 1B Anthony Rizzo paces the NL in fan balloting for the 2016 MLB All-Star Game presented by MasterCard. pic.twitter.com/hIgb4KMwAn

Second baseman Ben Zobrist, who simply lit up the baseball world in the month of May, has a wide lead over Daniel Murphy. While Zobrist can’t quite match Murphy’s .397 average, he does enter the month of June ranked second in average (.345), third in home runs (7) and first in RBIs (35).

Addison Russell currently clings to a slim lead at shortstop, leading Colorado’s Trevor Story by less than 10, 000 votes. Story currently leads NL shortstops in most offensive categories, including triples, home runs and RBIs, so it would be extremely hard to be upset if he were to eventually get the nod.

Kris Bryant holds the lead at third base for the moment by a nice margin of 182, 416 over Colorado’s Nolan Arenado.

If the voting stays like this, it would mark just the second time in National League history that the starting infield would be comprised of members of the same team. The St. Louis Cardinals accomplished the feat in 1963.

It’s highly unlikely that Miguel Montero will catch either Yadier Molina or Buster Posey at catcher (a common problem this time of year), but Jake Arrieta has an extremely good chance of being the National League’s starting pitcher.

Add the fact that Dexter Fowler is in line for a starting spot in the outfield (he currently sits in second place behind only Harper), and there is very strong chance that the Cubs would own six of the nine starting spots in the NL lineup.

It’s just one more part of what could be the most special year in Cubs history.