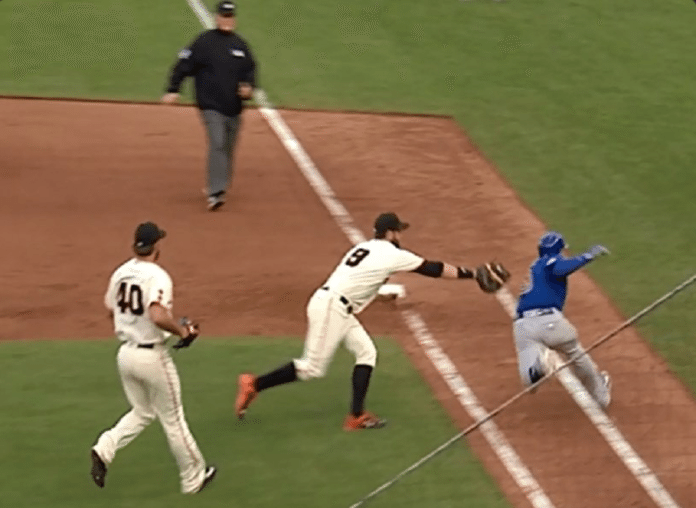 Just trying to get anything going against a dominating Madison Bumgarner last night in San Francisco was a chore for the Chicago Cubs, so Javier Baez tried to bunt his way on base in the eighth inning of last night’s loss to the Giants. Bumgarner picked up Baez’s bunt down the first base line but as he went to tag him, Baez moved slightly to his right into foul territory and slid to the ground before touching first base, avoiding the former World Series MVP’s tag, only to be called out by veteran umpire Dana DeMuth.

Cubs manager Joe Maddon was out of the dugout immediately to argue the call, at one point telling Demuth “you’re f***ing better than that”, as you can see in the video clip below.

CHC@SF: Maddon, Cubs dispute out call at first base https://t.co/EMo5TThvQt

Still baffled by the call and the “gray and ambiguous” MLB rule 7.08, which states “a runner’s base path is established when the tag attempt occurs and is a straight line from the runner to the base he is attempting to reach safely”, Maddon commented on the situation after the game.

“I go way back with Dana. It was not an egregious move on Javier’s part by any means. I was really surprised by the call.”

It’s impossible to know if the Cubs could have gotten anything going, but having the lead-off man on in a one-run game, especially as Bumgarner’s pitch count was on the rise, obviously would have put Chicago in a better position. Even the ESPN announcers didn’t agree with the call. When asked what explanation he was given by DeMuth, Maddon had a straight and simple answer.

Which Cubs Prospect Put His Penis In Coffee And Then Drank It?

REPORT: MLB Working On Plan To Start Back Up In May