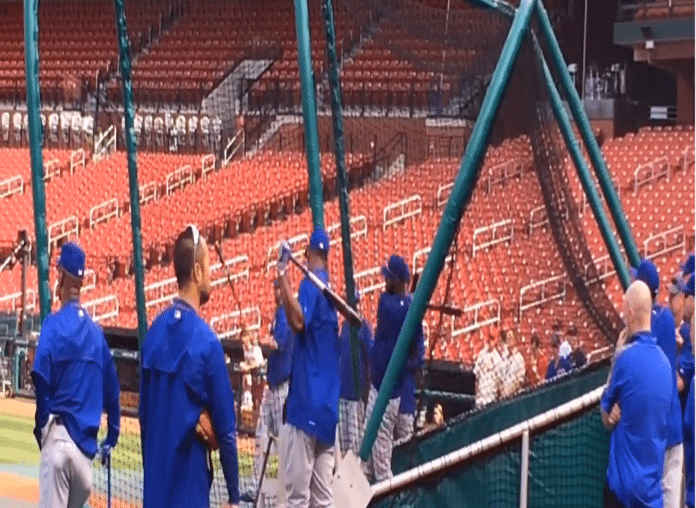 It’s been four days now since Jason Heyward crashed into the wall at AT&T Park in San Francisco making a fantastic catch to rob the Giants’ Denard Span of an extra-base hit in Friday night’s Cubs win. While Heyward suffered a rib cage contusion, things originally looked much worse when the injury occurred. After losing Kyle Schwarber early in the season, Cubs GM Jed Hoyer was afraid that he was going to lose his biggest offseason investment as well.

“My first reaction was ‘Great catch, ‘ and my second reaction was, ‘That looks like a guy who will be out for a while.’ I think we did dodge a bullet.”

Dodge a bullet the Cubs did. Heyward did not have to go on the disabled list and was projected to miss up to a week. If it were up to him, however, he’d already be back on the field competing against his former Cardinals teammates, especially after saying how great he felt after taking some batting practice prior to last night’s series opener at Busch Stadium.

“I don’t have a whole lot of pain. There’s dull soreness. I’m not worried about tearing anything. That’s why I’m [saying], ‘OK, let’s try and get moving’ and take that stride. I want to play as soon as possible.”

Heyward has passed each and every test that the trainers have put him through, including range of motion and agility drills. It’s also a good sign that he’s not having any headaches. Being “as normal as possible” was the goal yesterday and while the final decision doesn’t ultimately belong to him, Jason Heyward says he’s ready to go.

“If it was up to me, I’d be playing right now. Obviously, you have to go through stuff and test it out just to make sure. We’ll see what they say and see how I feel.

“”I love how I’m feeling. I have complete confidence to go out there and test it out. I wouldn’t go do it if I didn’t trust it, and they wouldn’t let me do it if they didn’t trust it. Everybody’s on the same page.”

Tonight’s lineups will be announced in a few hours and we’ll definitely have those for you when they become available. What do you think? Will Jason Heyward be on the lineup card tonight?