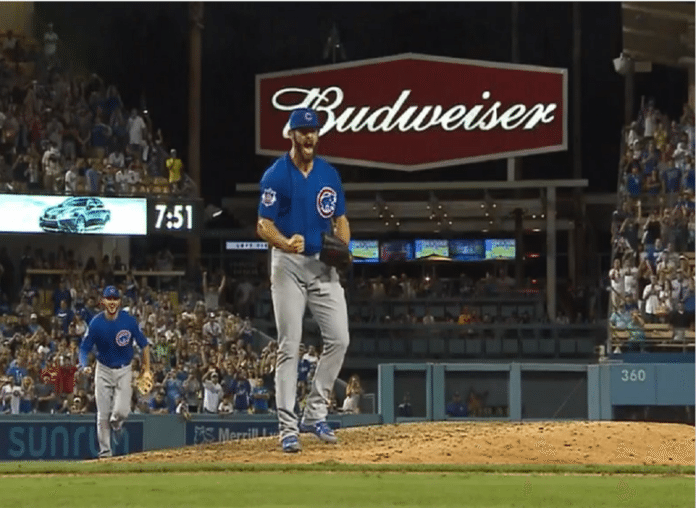 Pitching took center stage on Monday at Wrigley Field as the Cubs’ bullpen was brilliant in relief of starter Jason Hammel, who exited the game after a hamstring cramp kept him from beginning the third inning. Four pitchers combined to throw seven innings of no-hit baseball in Chicago’s 2-0 win over the Los Angeles Dodgers.

Speaking of pitchers no-hitting the Los Angeles Dodgers in a 2-0 victory, that’s exactly what Jake Arrieta did the last time he faced them back on August 30 of last year, which means that Cubs pitchers have allowed only one hit in their last 18 innings against LA. The reigning Cy Young winner allowed only two baserunners that night in the first no-hitter of his career. Kike Hernandez reached on a Starlin Castro error in the third and Jimmy Rollins walked in the sixth. Other than that, Arrieta was perfect and he comes into tonight’s contest still holding a perfect record on the season at 9-0. He is, however, coming off of his worst outing of the season after allowing four runs on seven hits in five innings against the Cardinals last Wednesday. That’s the first time he’d given up more than three runs all season.

He’ll be opposed by Dodgers left-hander Scott Kazmir, who hasn’t faced the Cubs since beating them in June of 2010 as a member of the Angels. He’s coming off a very solid outing against the Reds, in which he gave up just one run over six innings.