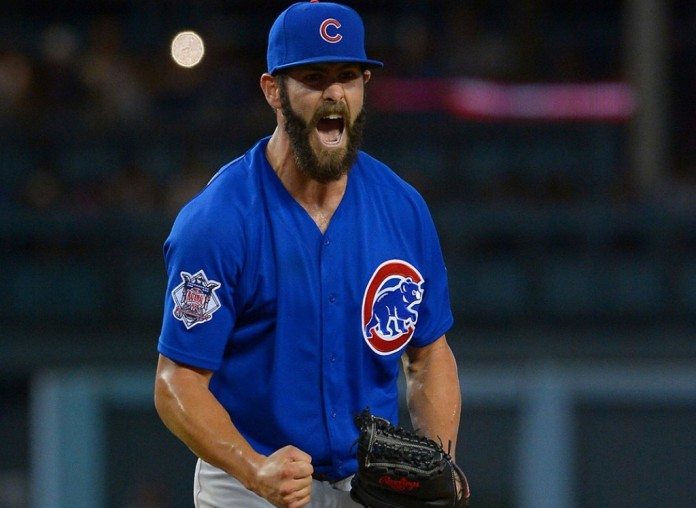 That was Jake Arrieta’s response to another tweet sent out before last year’s Wild Card matchup with the Pirates.

Be ready for the sea of black #BlackOut#BUCN#crowdIsGoingToEatYoualive#walkTheplank@JArrieta34pic.twitter.com/SB5YVKb3Je

We all know how that turned out, don’t we? Arrieta put on a dominating performance last October with a complete-game shutout of Pittsburgh as the Chicago Cubs moved onto the NLDS and returns to the scene of his epic performance as the North Siders take on the Pirates in the second of a three-game set at PNC Park.

Ahead of tonight’s start, which will see the reigning Cy Young winner go for his sixth victory of the season, Arrieta discussed the tweet that made him one of Pittsburgh’s least favorite people.

“That’s the whole point of social media — to interact. Sometimes it’s well received. Sometimes it’s not. But that was the intention there — to fire people up — and I think that’s exactly what I did.”

Arrieta realizes that he may be one of the main villains to Pirates fans in this exciting Cubs-Pirates rivalry, which was on full display last night, but also understands that it’s just a loyal fan base rooting on their team.

“Their fans are good. They’re passionate about their team and their guys, so it’s something that I enjoy. I don’t expect them to be my biggest fan — or a fan of me at all — but that’s the nature of fans and the fans that really support their team.

“When you’re at the top of your game, when you’re one of the teams to beat, it’s just something that comes with the territory.”

The Cubs have shown that they’re the team to beat in the NL Central. Following last night’s victory, the Cubs bring a Major League-best 18-6 record into tonight’s contest. Arrieta will also be looking to make a little history tonight as no Cubs pitcher has gone 6-0 in his first six starts since 1913. Greg Maddux came close in 2006 by winning his first five outings and Arrieta will look to surpass that tonight. He’s also won 16 consecutive regular season starts dating back to last July 25. A win tonight would break Rick Sutcliffe’s franchise mark that spanned the 1984-1985 seasons.

The Pirates will counter with left-hander Jonathon Niese, who has a 3-6 career record against the Cubs to go with a 4.76 ERA. He was 0-2 against them last season.

Here’s everything else you need to know about tonight’s game.