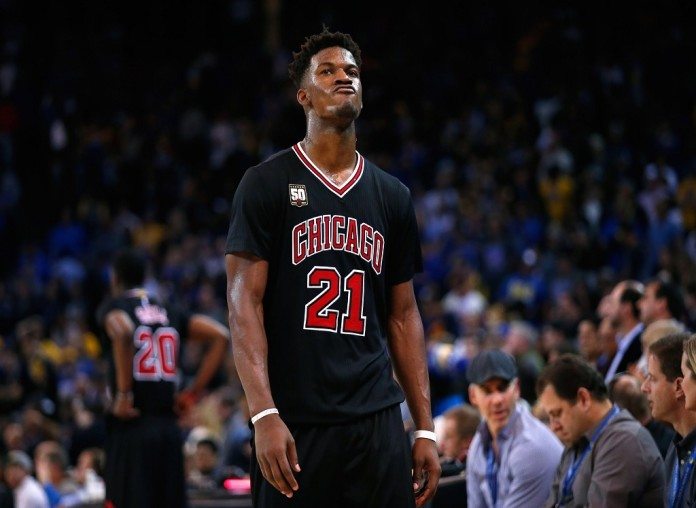 The Chicago Bulls’ season is just about over, but that doesn’t mean that the drama is over as well. In fact, yet another story surrounding All-Star guard Jimmy Butler is just getting started. It wasn’t that Butler scored 23 points and pulled down 11 rebounds in Monday night’s win at New Orleans. It’s how he got to the game that’s the issue at hand.

Butler flew separately from his Bulls teammates in what’s being called “a family issue”, a flight that head coach Fred Hoiberg approved. However, ESPN’s Chris Boussard says that Butler’s travel arrangements prompted at least one Bulls player to say that he receives “preferential treatment”.

Here’s the video from ESPN.

“Some players, and I’m not saying it wasn’t a family commitment, but there were some – I know at least one player in particular, a starter – who felt like he was a bit bothered by the fact that Jimmy wasn’t on the plane. And it was a misperception. He felt it was emblematic of a little bit of the preferential treatment that a lot of people say Butler’s been getting now that he’s emerged as the best players on the Bulls from the front office and things like that.

“There’s a division. There’s all types of dysfunction in Chicago. There’s kind of a division in that locker room.

“The younger players see Butler as the leader. He’s clearly been their best player the last two years. They see him as the leader.

“The other guys, the veterans who’ve been there, it’s not so much of disrespect of Jimmy, but they don’t see him as the team as the team leader. They remember when you were averaging two points a game.”

Just another day in the Chicago Bulls locker room. What do you think? Is Butler receiving “preferential treatment” and which starter do you think made the comment? Or is this just Broussard and ESPN attempting to make something out of nothing with not enough information to know why Butler had to take a separate flight in the first place?