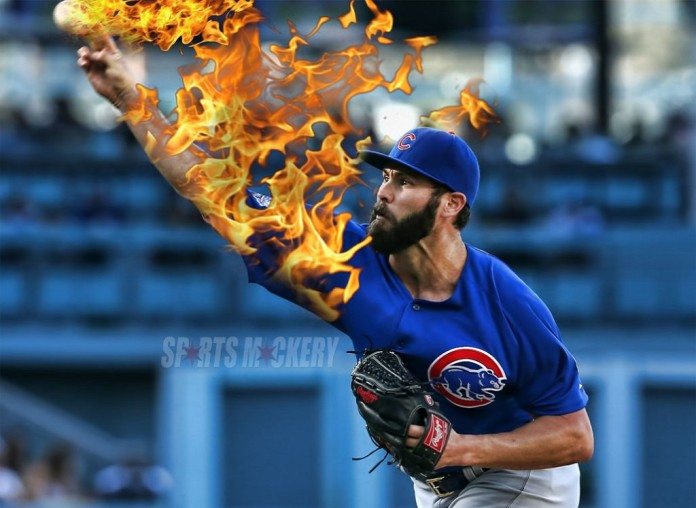 Opening Day, or Opening Night in the Chicago Cubs’ case, has finally arrived and Jake Arrieta is ready to go. The 2016 season comes with a ton of expectations on the North Side and while the Cy Young Award winner knows how special tonight is, he’s also completely aware that there’s a lot of time between now and what he and Cubs fans around the world hope will be a special October.

“It means something special to everybody, not only myself, but my team behind me. Everybody’s been waiting for this moment. It’s finally here. To be the guy on the mound for the first one is something special. After that game is over, there’s 161 games on the schedule to fight through as a team.”

Jake Arrieta’s 2015 season was one for the ages. He set a career high with 22 wins and in doing so became only the fifth pitcher in MLB history to post that many wins with an ERA under 2.00 (1.77) and have no more than six defeats, joining Sandy Koufax, Denny McLain, Ron Guidry and Dwight Gooden. That’s some nice company to have. His battery mate for a lot of those wins, Miguel Montero, realizes that repeating a season like that will be extremely difficult.

“It’s something that’s hard to repeat. That could be the best year of his career. Even if he comes up and wins 18 games and has an ERA of 2.20 or 2.30 or 2.50, that’s a really good year, that’s Cy Young numbers right there, and people may be a little disappointed because of that? I don’t think you can be disappointed in that.

“He’s got the potential to do it, but that being said, I don’t want to put more pressure on him than what he already has. I know he probably thinks he has to do the same, and he doesn’t need to do the same.”

The Cubs have never had back-to-back Cy Young Award winners, but don’t think that Jake Arrieta isn’t ready to try. He showed up to spring training in better shape than he did a year ago and is adamant about sticking to his workout routine. He only missed one start during spring training and that was simply due to a blister on his right thumb, which became a non-issue as he threw 102 pitches in his final Cactus League start last Tuesday against Oakland.

The 30-year-old right hander understands how special that stretch was, but also realizes that an encore performance is a monumental task and is up for the challenge.

“It was a record in all of baseball ever, so to say I’m going to have those numbers again is probably not realistic, but they’re going to be good, I know that.”

Jake Arrieta is ready to go. I think it’s safe to say that Cubs fans are too.