Remember the story of NHL enforcer John Scott? You know, the guy who didn’t really deserve to be an NHL All-Star this season but got voted in by the fans and ended up winning the All-Star Game MVP? Well, if Cubs fan Brian Dunigan has his way, veteran Chicago catcher David Ross will follow that same path.

“Basically, a couple weeks ago, I’m sitting at my friend’s house on a Friday night and we’re just hanging out. I said, ‘What if we started this Twitter campaign, a John Scott-type of movement for a baseball player?’ ”

It was soon decided that David Ross would be that baseball player. Now, let’s be honest with ourselves here. David Ross is not an All-Star-caliber player. He never has been and never will be. That’s certainly not a knock on him as I happen to love David Ross. Most people do. But it’s impossible for anyone reading this to really think that. Is he a solid veteran catcher? Absolutely. Is he the type of player that any team would want in the clubhouse? Damn straight. But the facts are that he’s a career .229 hitter that hasn’t played in more than 72 games (last year’s total) since playing 112 games for the Cincinnati Reds in 2007. If you’re counting, he’s played in eight thus far in 2016.

But none of that seems to matter to Dunigan, who is set on making this happen and has even started a Twitter account, @RossAsg16, to help his cause. At the time of this writing, the page has more than 800 followers and that number seems to be growing every day. Dunigan just thinks that Ross’ last season should be a memorable one. 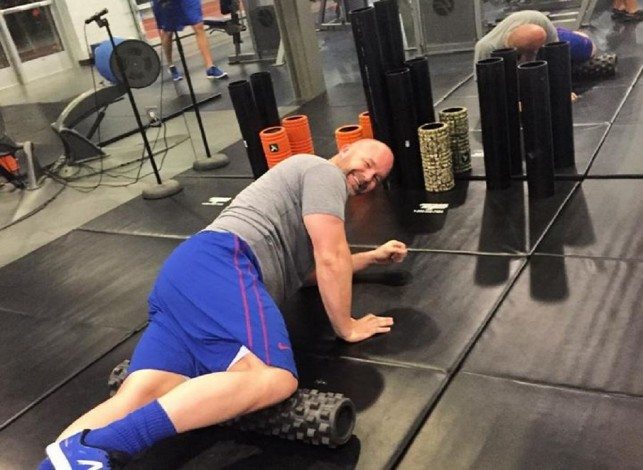 “This is a cool way for him to get sent off. Because it’s not like he’s going to get a present when he goes to Milwaukee the last time. They’re not going to have a ceremony for him.”

Dunigan is banking on the fact that David Ross has played for seven different organizations and is hoping that those fan bases join him in this wild venture.

“If you ask Red Sox fans, they’ll say, ‘Hey, that guy was a stud for us in the World Series. We love him in Boston.’ Braves fans think, ‘That guy needs to our next manager.’ Cubs fans think he’s the heart of the team.”

He also points to last year’s voting process when fans of the Kansas City Royals essentially tried to stuff the ballot boxes in order to have their entire starting lineup in the All-Star Game.

“If you’re going to have fanbases hijack all eight positions like the Royals almost did last year, why not let a guy like David Ross into the All-Star game? When fans are allowed to vote, things like this can happen and take traction.”

He’s certainly right about that. Fans are allowed to vote online up to 35 times and while Ross isn’t on the ballot, there is a write-in option available, which is why Dunigan is asking for people to start using the #WriteInRoss hashtag on Twitter to show their support.

Stranger things have happened and while Dunigan is obviously aware that getting David Ross to San Diego is a long shot, that’s not going to stop him from trying.

“To see a 39-year-old journeyman starting the All-Star game, catching Arrieta or Kershaw or whoever happens to starts, you can’t say that’s not going to be a cool moment.”

If you’re looking to join in the fun in the attempt to get Grandpa Rossy to the All-Star Game, you can access the ballot here.