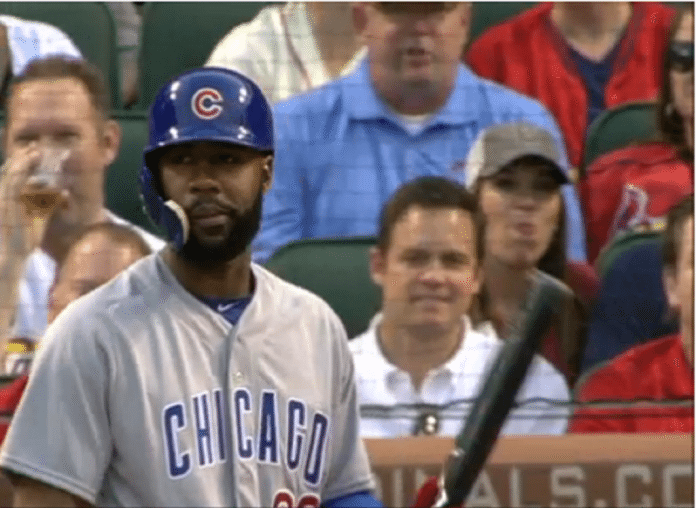 Jason Heyward had a rough night in his highly anticipated return to St. Louis last night and unfortunately, it’s got nothing to do with his 0-for-4 night at the plate.

Playing in his first game at Busch Stadium since turning down a reported $200 million offer from the Cardinals to sign for less money with the Chicago Cubs, Heyward was unsurprisingly booed loudly by the majority of the St. Louis faithful.

The boos aren’t the problem. They’re simply a part of sports and it’s not as if Heyward, or anyone else for that matter, wasn’t expecting them.

While the Cubs did enjoy a 5-0 win in the first of 19 games between the two clubs this season, which included two great sliding catches from Heyward, the big story was the crowd. ESPN carried the game last night and according to the New York Daily News,  their microphones picked up some unfortunate language from some unhappy, ignorant and racist Cardinals fans. While there doesn’t seem to be any footage available, numerous people took to Twitter last night saying that they’d heard the N-word thrown in Heyward’s direction.

ESPN needs to be *very* careful with opening up their crowd mics. There are absolutely nasty things being said right now towards Heyward.

Jason Heyward has been referred to via N-word 2x already on audio by Cardinal fans in return to St. Louis. Stay classy #BestFansInBigotry

Hey, #Cards fans! While you were too busy yelling the N-word and booing Heyward, the #Cubs were busy winning!

I honestly didn’t hear that on the broadcast last night, but if it is true, it’s unfortunate that this type of bigotry still exists in the game of baseball (or anywhere else for that matter), and it happened only three days after Major League Baseball celebrated Jackie Robinson Day.

More on this story as it develops.