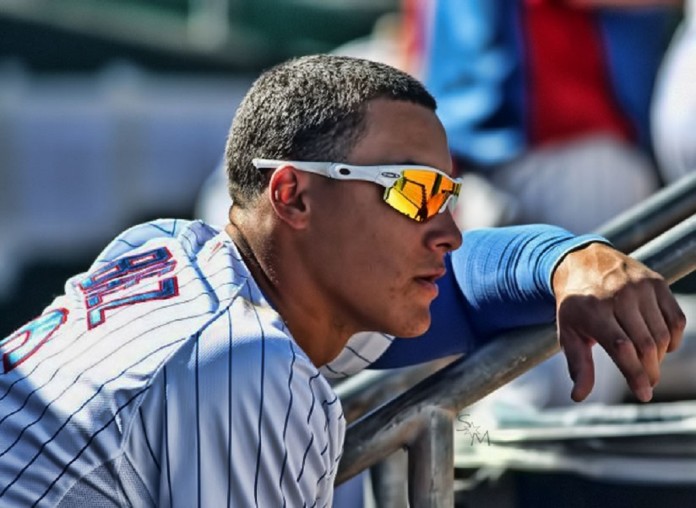 When spring training began for the Chicago Cubs, it seemed to be a foregone conclusion that Javier Baez was a shoe-in for the team’s final 25-man roster. However, with Opening Day only a week away, that’s no longer the case according to Cubs manager Joe Maddon.

“We’re attempting to create an 11th hour to get this whole thing done. But getting more definition about Javy is really important right now.”

The problem is that Baez hasn’t played in a Cactus League game in over a week. In a March 20 win against the Kansas City Royals, Baez jammed his left thumb while diving headfirst into first base and has been on the shelf ever since. With only two games remaining in Cactus League play before the team heads to Las Vegas for two exhibition games against the New York Mets, Maddon voiced his concerns about the 23-year-old being ready for Monday’s opener against the Angels.

“Yes, absolutely, we are (concerned). That’s why we got to make up our mind relatively soon, so we can go to Plan B.

“The concern is that he has not had enough at-bats, that he’s not played enough in the outfield. Those are the kind of concerns that we have. So, yes, we need to try to figure out how we want to process all that right now.”

Spencer Patton has already been optioned to Triple-A Iowa, so the thought process is that Neil Ramirez will be kept on the roster as an eighth reliever and the final position player spot could go to either Munenori Kawasaki as a backup infielder or outfielder Matt Szczur.

Joe Maddon does have a lot of different options when it comes to moving players around the field, but he knows that having Javier Baez on the roster makes his job easier.

Maddon did make it a point to say that it’s not a matter of if Javier Baez will be on the big league roster this season, it’s only a matter of when.

Javier Baez did play catch before today’s game against the Angels, which is a good sign. We’ll just have to wait and see if he’s playing in Anaheim a week from tonight. Stay tuned.