Home VIRAL A Swarm Of Bees Caused A Crazy Scene At A Royals-Rockies Spring... 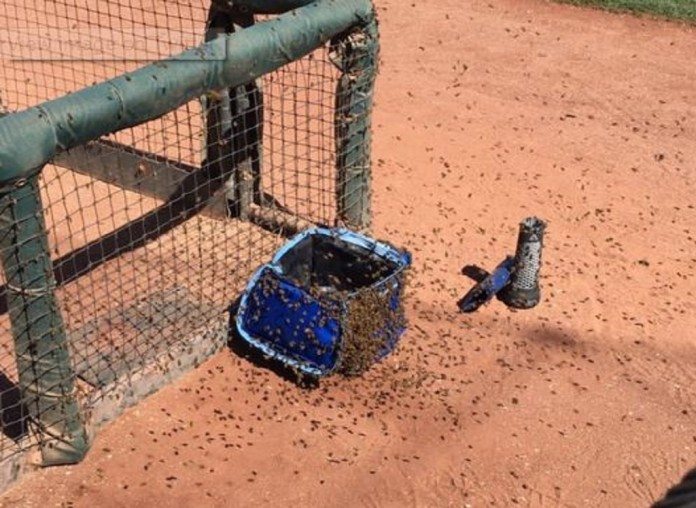 Surprise! Okay, that was a really bad joke, but the Colorado Rockies and Kansas City Royals did get one yesterday during their spring training matchup at Surprise Stadium.

This was the scene yesterday afternoon as a swarm of bees ransacked the spring home of the defending World Series champions, causing a ton of problems, especially for Royals manager Ned Yost.

Ned Yost would normally sit in a folding chair on the field. But those chairs are within the bee swarm. So he’s taking cover in the dugout.

Swarm of bees attached itself to this container next to the #Royals dugout. Since been cleared, but WOW! pic.twitter.com/jFzcdaPY06

Some of the fans in attendance were forced to move as well.

This is crazy. Lower level clearing out because there’s an unbelievable swarm of bees. Never seen anything like it. pic.twitter.com/Bw5RA66JyX

However, Ned Yost was not about killing all the bees surrounding him and his team, but instead about protecting them by vacuuming them up, which is apparently a thing.

#Royals Ned Yost wants the bees vacuumed up, not killed during game against #Rockies. @KCStar@Royalspic.twitter.com/wHoagjtBsN

And in a bizarre twist, there was actually a retired beekeeper in the stadium that helped alleviate the situation. Can’t make this stuff up, people.

On another bizarre note, exactly one year ago to the day, a swarm of bees attacked….yep, you guessed it….a Royals spring training game.

Bees like baseball, too. Who can blame them? #RoyalsSTpic.twitter.com/8CFCJeNd8T

Anybody taking odds on “Bees at Surprise Stadium” on March 8, 2017?