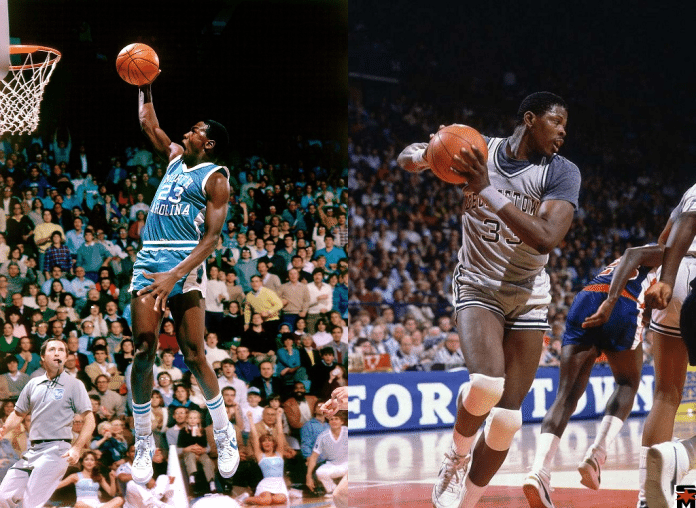 Patrick Ewing and Michael Jordan have been linked for what seems like forever. Jordan’s Chicago Bulls and Ewing’s New York Knicks were bitter rivals for years and had so many memorable playoff battles for Eastern Conference supremacy. They were teammates many times on All-Star teams as well as the 1984 and 1992 Olympic teams. Ewing even works for Jordan now as the associate head coach of the Charlotte Hornets. And let’s certainly not forget that the two Hall of Famers were co-stars in Space Jam.

But before any of that, Michael Jordan and Patrick Ewing were high school superstars that were being recruited by the University of North Carolina. In an interview with The Charlotte Observer, Ewing talks about how he almost ended up as Jordan’s teammate in Chapel Hill and recalls an impromptu one-on-one matchup with the future six-time NBA champion.

“Q: I know in the early 1980s you took a recruiting visit to UNC on the same weekend that Michael Jordan — your old NBA rival and friend and now the Hornets owner — was on a visit, too. How close did you come to going to Chapel Hill?

A. I did go on a visit and Michael was there at the same time. That was the first time I met him. Michael talked trash that day and he still hasn’t stopped.

UNC was one of the six schools that I considered. But when I was there, I remember Dean Smith telling me: ‘If you don’t come here, I think you should go to Georgetown.’

Georgetown was my first choice. UCLA was my second choice. If I had come to North Carolina, though, can you imagine? Me, James Worthy and Sam Perkins on the front line and Michael in the backcourt?! Dominant.

Q. Roy Williams told me a story once about that same recruiting visit to UNC that involved you and Jordan getting into a trash-talking pickup game on the spur of the moment at a campus gym. Is that true? And if so, who won?

A. It is true. We played in street clothes because Michael just kept trash-talking. I don’t even remember who won, but I do remember dunking on him.

Q. If you and Michael played one-on-one right now, who would win?

A. He would. Right now I think he’s in a little bit better shape than I am. He has been on a mission lately trying to get his weight down, and he’s succeeding. Meanwhile my knees are bothering me and I haven’t been able to do the same thing.”

Michael Jordan would obviously end up attending North Carolina, while Patrick Ewing chose to go to Georgetown. The two would meet in the NCAA title game their freshman year with Jordan hitting his famous game-winning shot in the Tar Heels’ 63-62 victory over the Hoyas. Ewing would get his title two years later. Jordan would be the third pick in the 1984 NBA Draft; Ewing would join him a year later and the rivalry continued with those memorable games I mentioned earlier. But the question remains….who won that first one?