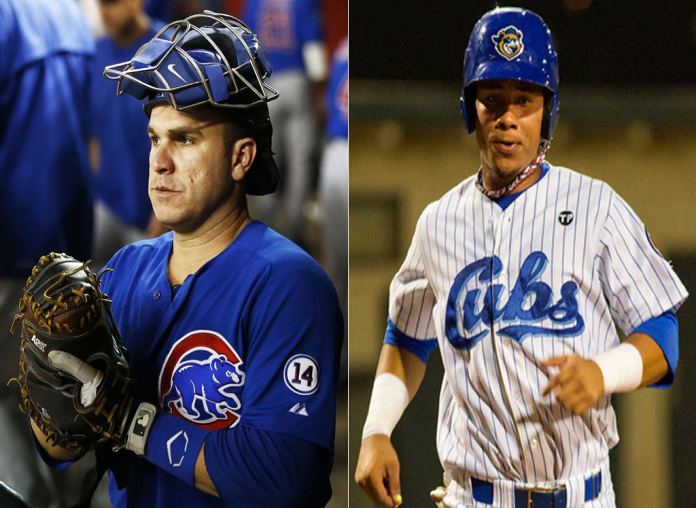 Chicago Cubs catcher Miguel Montero isn’t stupid. He’s been in the big leagues for a decade and completely understands how the business side of baseball works. At 33 years old, he knows that while he can still help his team win games on the field, he’s completely aware that there’s always someone younger waiting in the wings ready to jump at the opportunity to be an everyday player. For the Cubs, that player is 23-year-old Willson Contreras, who just happens to be the highest-rated catching prospect in all of baseball.

When Montero sprained his thumb last summer, an injury that prompted the Cubs to call up Kyle Schwarber, he was sent to Double-A Tennessee for his rehab assignment. Contreras was the everyday catcher for the Smokies and Montero finally got a good look at the guy that he knows wants his job someday. Contreras was in the middle of a season that saw him hit .333, which was good enough to win the Southern League batting title, and after seeing more of Contreras this spring (the two were also locker neighbors), Montero only wants to help the youngster get better.

Contreras was optioned to Triple-A Iowa over the weekend, but Cubs manager Joe Maddon has already said that he may be brought up to the big leagues at some point during this season, a move that Montero sounds like he would agree with.

“He could be in the big leagues right now.

“He’s very, very coachable. The tough part comes (down) to handling a pitching staff on the big-league level. It takes a little bit of time. But the only way to learn is to be in the big leagues. He needs to catch. He needs repetitions.

“It takes time to learn a big-league scouting report.”

Montero, who will make $14 million in each of the next two seasons, will still be the everyday catcher for the Cubs, but knows that with Contreras will be on the big league roster sooner rather than later, but the ten-year veteran doesn’t want to make things awkward. He wants to make the transition as smooth as possible whenever the move happens.

“Honestly, I would love to take him under my wing. I’m trying to help him every day. It’s hard to throw a young guy to the wolves like that on a good ballclub with a good pitching staff.”

As previously mentioned, Montero is 33. David Ross is 38 and in the last year of his career. Kyle Schwarber may end up behind the plate a few times this season, but he’s transitioning into life as an outfielder. Willson Contreras is the future of the Cubs’ catching core and Miguel Montero knows it. He also knows how hard it is to make the transition to the majors and is taking the same approach that he took last year when he had to help Schwarber adjust to life in the bigs. It takes time. Montero realizes that and he just wants to make sure that Willson Contreras realizes that as well.

“You need to ease his way into it. But there’s no doubt in my mind he’s an everyday guy.”

There’s no official timetable for Contreras to be called up, but at least now he knows that he’ll have a mentor ready and willing to help out when he does.