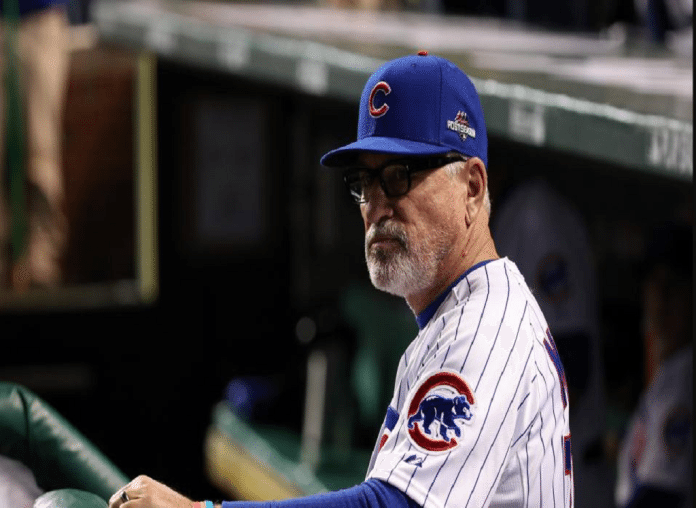 Chicago, you have a problem.

Okay, pardon the dramatics but the Chicago Cubs do have a problem…sort of, but it’s an issue that any ballclub would love to have. To put it simply, the Cubs have a lot of good players and manager Joe Maddon is certainly aware of the talent surrounding him on a daily basis.

“Definitely the depth is really intriguing with this group. You need that to be successful over a long season. You’re going to have things happen, there’s no question.”

Maddon is right. The grind of a 162-game regular season wears on everyone, but the issue right now is that with less than two weeks away from Opening Day, the Cubs are a pretty healthy team. Obviously, that’s not a real problem, as it’s the Cubs’ depth that has made them a popular World Series favorite, but finding at-bats for everyone will prove to be a challenge for the 2015 National League Manager of the Year. Maddon explains how he’ll go about getting that done this season.

“You like to go into it with some kind of schematic, probably having lineups made up on a weekly basis to try to filter guys in or out. However, guys are going to get hurt, somebody might get exceptionally warm, and maybe the matchups are still good. The everyday guys will play every day. But I may have to be more — not creative, necessarily — more planned in a sense, on a weekly basis. Previously, I’ve gone on a series basis. I may have to take it on a two-series basis now.”

Assuming everyone can stay healthy, filtering guys in and out as Maddon mentioned won’t be an issue given the Cubs’ flexibility. Javier Baez can and has played all four infield positions and also put in plenty of work in the outfield over the winter as well as in spring training. Jorge Soler can play either of the corner outfield spots. Jason Heyward was thought to be the everyday center fielder until the Cubs went out and re-signed Dexter Fowler. Kyle Schwarber has also been working in the outfield, but is expected to catch at least every fifth day when Jason Hammel is on the mound. David Ross will fill one of those five days up as well when Jon Lester pitches. Otherwise, expect to see Miguel Montero behind the plate most days.

Addison Russell will spend most of his time at shortstop, but has major league experience playing second base, which is where you’ll usually see newly-signed Ben Zobrist. However, Zobrist has made a career of being a utility guy and can play just about anywhere. In addition to his days at third base, NL Rookie of the Year Kris Bryant played all three outfield spots last year.

While Maddon mentioned that the everyday guys will play every day, he also thinks it’s important for guys like Soler and Baez, who certainly aren’t guaranteed spots in the everyday lineup, to get their fair share of at-bats.

“Guys that young, you don’t want to retard their development at all through inactivity. So that’s why we’re talking about planning a week in advance. When it comes to young players you’re developing, the concern is always going to be that you’re not going to give them enough work. It’s something to be mindful of.”

The Cubs’ depth and flexibility are things that should be able to keep the team a little fresher than most as the season progresses. It will certainly be a treat this year to see what the lineup looks like each day as Joe Maddon decides who’s in and who’s out. It’s nice to have a problem that everybody wants.