Home Chicago Cubs Jeff Samardzija Says His Heart Is In Chicago, Takes A... 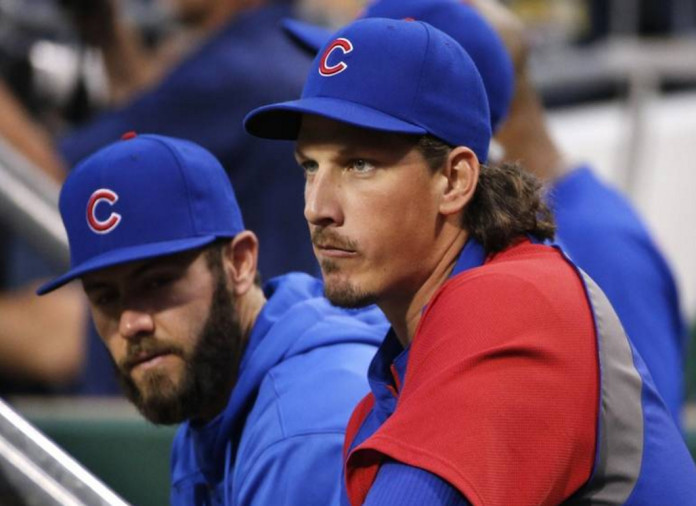 Earlier this month, former Cubs pitcher Jeff Samardzija explained how much respect he has for Theo Epstein after the two met in November to discuss a possible return to the North Side. It just turns out he didn’t respect Epstein’s plan as much.

While no deal was ever offered to the right-hander, Samardzija said that he was happy that things worked out for both sides. He signed his five-year, $90 million deal with the San Francisco Giants while the Cubs signed the short-term option they were seeking in the way of a two-year deal with John Lackey.

What can’t be ignored is that only two weeks before the Cubs traded Samardzija in 2014, they offered him a five-year, $85 million extension that he turned down. Now he’s offering up the reason on why that happened.

“I remember coming up, it was always the talk about prospects.

“It was the easy thing to do. You can always sell the future, and people always buy it. It’s a great way to rebuild, and I understand that.

“But as a veteran guy, it was becoming a joke.’’

Surely, Samardzija couldn’t have predicted what would happen after he departed as the Cubs went 97-65 in 2015, winning the wild card game against Pittsburgh and the National League Division Series against the St. Louis Cardinals before being swept in the NLCS by the Mets. Apparently, it was just taking too long for Epstein’s promises to come to fruition.

“I just got so sick of hearing about it. They had to do what they had to do, but as a professional, you always want to be competing, not hearing some rhetoric every year.

“There are certain things you don’t forget.’’

Looking back on it, Samardzija may have done things differently.

“IF I HAD A FORTUNE TELLER, I PROBABLY WOULD HAVE STAYED. BUT YOU HAVE NO IDEA, MAN.’’

The Cubs are probably thinking differently. When the Cubs dealt Samardzija to Oakland, they received Addison Russell in return, along with outfield prospect Billy McKinney, who’s currently ranked sixth in the Cubs’ minor league system. They’ve since signed Jon Lester and the aforementioned John Lackey to the pitching staff and Jake Arrieta went ahead and won the Cy Young Award. They’ve added Jason Heyward and Ben Zobrist in free agency and those prospects that Samardzija wasn’t willing to wait on have developed quite nicely. Theo Epstein had his plan and it’s paying off.

“It was a risky plan, right, counting on the draft and Cuban guys and things like that. They spent money to get guys. They hit on the guy Bryant who’s a difference maker. (Anthony) Rizzo came on. Now, they’re rolling.’’

“They will always be in my heart. I’ll take pride in what they do because I’m a Chicago guy. You always want to see your boys do well, until we play against them.’’

Samardzija may be a Chicago guy, but for the immediate future he’s a member of the San Francisco Giants and seems to be absolutely loving it.

“I’ve never been on a team where baseball is talked about this much consistently, or surrounded by a group of guys that love the game as much as they do. Just a bunch of gamers, talking ball. I can take a deep breath, not have to answer trade rumors anymore, worry where I’m going to live, or talk about rebuilding. This is where I belong.

“This is a team everyone wants to be part of. It’s like the Cardinals. They have that fighting mentality and they’re in every game.

“I can finally put all of the chips on my side of the table. Man, I am ready.’’

The Cubs will see Jeff Samardzija and the San Francisco Giants for the first time this 2016 season on May 20.