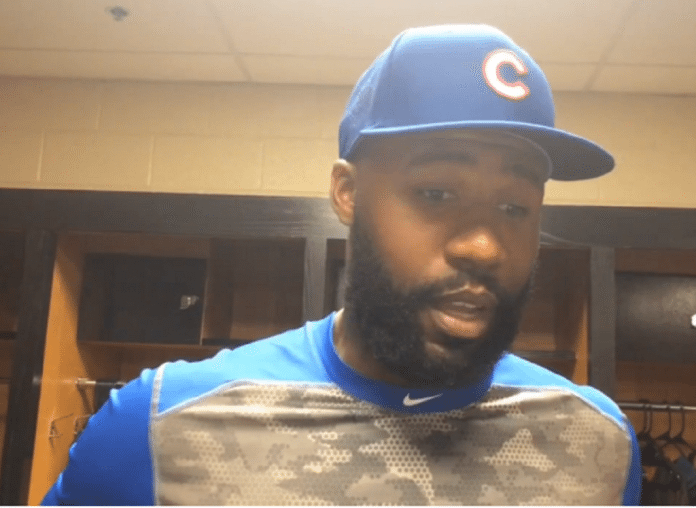 If you missed yesterday’s nationally televised spring training affair between the Chicago Cubs and San Francisco Giants, then you missed a quick little confrontation between Cubs outfielder Jason Heyward and Giants pitcher Madison Bumgarner. In the top of the fourth inning, Heyward struck out looking and appeared to start a conversation with the former World Series MVP. Here’s what transpired.

Jason Heyward is already fitting in as a Cub! pic.twitter.com/OJMoqvSQf4

Nobody quite knew at the time what the problem was, but things became a lot more clear following the game when Bumgarner accused Heyward and Dexter Fowler, who was on second base at the time, of stealing signs.

“I thought (Heyward) was looking at me or talking to me. He said he wasn’t. There’s only one other person for him to be talking to, and that’s down at second base (where Fowler stood).

“(Heyward) he didn’t say anything to him. He looked at him, from what I can tell. It looked like he was upset with him. There’s only one reason they could be doing that…You might want to be more discreet about that if you’re going to do that kind of thing.”

Heyward essentially laughed off the accusation and even praised Bumgarner for an excellent pitch.

“Madison made a good pitch on me, a front door cutter. I wasn’t sure if it was a strike or not at the time. I was looking out at second base and I could see Dexter and (said), ‘what do you got, ball or strike?’ I thought it might have been around the plate. But either way, I’m out. Bottom line.

“Next thing you know, I see (catcher) Buster Posey coming out of my peripheral saying, ‘hey, hey.’ I was like, ‘what’s going on?’ No. Then I saw Madison, who said, ‘you looking at me?’

“I wasn’t looking out at anybody. I wasn’t trying to show anyone up. I played against those two guys since 2008 in the minor leagues. It’s always a battle. It’s always fun. First class guys who play the game the right way. I try to do the same.

“That’s was it. I think it was a misunderstanding.”

Heyward continued his laughter when discussing how Fowler responded to the question.

“Dexter was so discreet I was still waiting for a response. It was very subtle. ‘What does that mean? Just give me a thumb’s up on the side.’

We’ll see if anything comes from the incident when the Cubs visit the Giants for a three-game weekend set starting May 20.