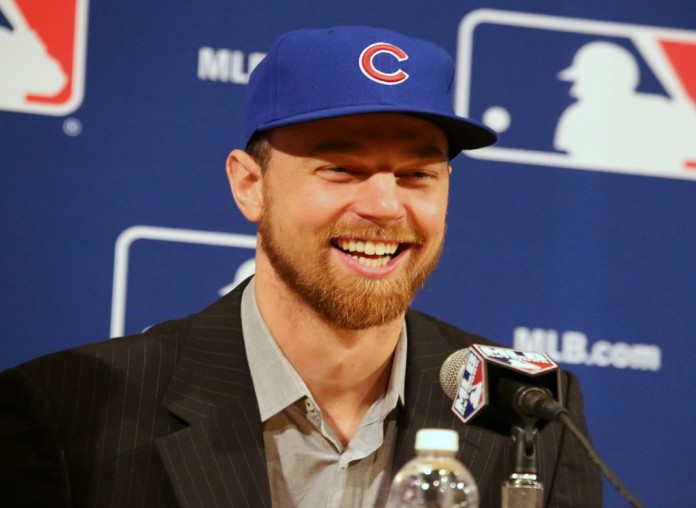 Coming out of Eureka High School, which sits approximately 145 miles southwest of Wrigley Field, utility man Ben Zobrist didn’t have one college offer. It wasn’t until he participated in a summer showcase event in neighboring Peoria that he was offered the chance to play for Olivet Nazarene University in Bourbonnais, where he played for a few years before transferring to Dallas Baptist University for his senior season. The fact that Zobrist was selected in the sixth round of the 2004 MLB Draft and made his major league debut only two years later shows how hard Zobrist worked on his game and is a good enough story in itself. However, it was only the beginning of a 10-year journey for Zobrist to find his way back home.

“Illinois is home. To be able to come home and try to win a championship where it hasn’t been done for a long, long time – in front of my hometown state, family, friends and with my manager that I grew up with in the major leagues – is kind of a dream situation for me.”

It’s a great situation for the Cubs as well. As it turns out, Zobrist has been on their radar for quite some time. After playing for nine years in Tampa Bay, all for Joe Maddon, the Rays were looking to deal the versatile Zobrist and the Cubs were very interested. However, things didn’t work out for a number of reasons. It didn’t help matters that Tampa Bay thought the Cubs had broken major league rules by contacting Maddon about becoming thier manager before he opted out of his contract. They also wanted a player like Addison Russell or Kyle Schwarber in return, something that the Cubs simply weren’t willing to do to acquire Zobrist in the final year of his contract. Zobrist was eventually traded to the Oakland A’s.

Near the trade deadline last July, Theo Epstein was still adamant about bringing Zobrist to the North Side and contacted Billy Beane about a possible trade. Yet again, talks fizzled as the A’s wanted too much in return, including a top pitching prospect. All the while, Zobrist just continued to come out and play where and when he was needed.

“As a player, you try not to pay too much attention to rumors, because that’s all they are. Whenever you’re on the trade block, you never know if anything will actually happen. Plus, you got a job to do.”

Zobrist spent the rest of 2015 doing that job pretty well. He was traded to the Kansas City Royals in late July and was a key contributor to the Royals’ run to a World Series title. He hit .303 in the playoffs with 20 hits, 15 runs scored, two home runs and six runs batted in. Zobrist feels that his time with Kansas City has prepared him for what’s ahead in Chicago.

“But to be able to land with Kansas City was a huge blessing. To get a sense of playing there – and playing in the playoffs and going all the way – all of that has kind of prepared me for this moment.”

The Cubs’ front office was paying attention to Zobrist’s run in Kansas City as well and knew that with one of their main targets finally on the open market, they had a real chance of finally getting him to Chicago. Starlin Castro was moved to the New York Yankees, which opened up a spot at second base and everything just fell into place. Now, Zobrist did take the time to talk to some other teams. He met with the New York Mets, who offered him a four-year, $60 million contract, an offer that was later matched by the San Francisco Giants. The Washington Nationals jumped in as well with a $56 million offer of their own and that was for just three years of service.

The crazy part to Ben Zobrist deciding to go with the Cubs’ four-year, $56 million offer is that he never actually met with them. Everything was done on the phone. Zobrist just knew it was right and made the choice.

“The Cubs pretty much stay under the radar. That was one place I knew – just because of Joe – and I knew the city a little bit. (With) the stadium, Theo’s track record, I didn’t feel like I needed a face-to-face.”

Joe Maddon thinks it was the right choice as well and is eager to have a veteran like Zobrist in the clubhouse.

“He’s so professional. He’s a winner. It’s just the way he plays the game (with) patience at the plate, both sides of the plate. He works a great at-bat almost every time out there (and) can play multiple positions well. He’s a good, heads-up baserunner.

“When you talk to him – and when he’s going to talk to all these guys (in the clubhouse) – what’s his agenda? To win. That’s it. He’s got nothing else on his mind.”

Ben Zobrist’s story is truly a remarkable one. Fifteen years ago, he thought that his days of playing baseball were over. He’s now a two-time All-Star, a World Series champion, was one of the hottest free agents in the game and is now playing for a major contender in his home state. Ben Zobrist is ready to go.

“They’ll get everything I got for the next four years. Hopefully, we can win at least one (title) during that time.”

Cubs fans are with you on that one, Ben. Welcome home.