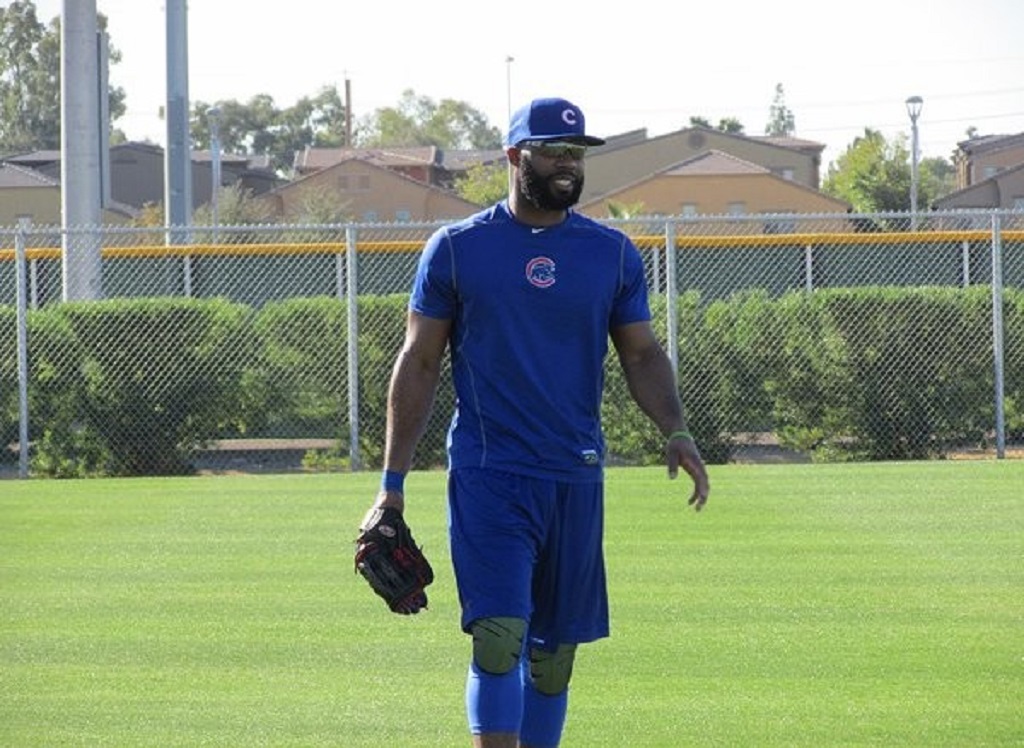 Jason Heyward hasn’t played one game yet for the Chicago Cubs, but the 26-year-old outfielder is already receiving high praise from his new teammates and coaches. Heyward, who back in December signed the richest contract in franchise history (8 years, $184 million), arrived to spring training more than a week early and is already making a great impression.

Pitcher Jason Hammel was immediately impressed and said that Heyward is one of only two five-tool players in Major League Baseball, the other being Angles center fielder Mike Trout.

“The guy is a specimen. This organization has touted themselves on the character they bring in, and he’s no different. He gets it. Hard worker and you can tell that he cares….I can’t wait to see him play.”

“He’s really smart. A lot of things we talk about, not a lot of guys talk about. He’s very advanced in the game. He sees everything. He watches everything, which is not easy to do. He’s five steps ahead of the game.”

However, it’s not just the established players that are heaping praise upon Heyward. Cubs outfield prospect Albert Almora says that Heyward is “100 percent” committed to helping out some of the younger players during his first spring training as a Cub.

”As a guy in my position, you kind of wonder how those guys are gonna treat you, but the first day I met him he shook my hand and gave me a hug like he’s known me forever. I was like, ‘Wow, that’s pretty cool.”’

Second-year Cubs manager Joe Maddon was already impressed with Heyward as a player from his previous service time with the Atlanta Braves and St. Louis Cardinals, but it was Heyward’s maturity and intellect that caught Maddon’s attention during the Cubs’ pursuit of the three-time Gold Glove winner.

”We had a really good conversation. It revealed to me a lot of what I thought I was seeing. He was a very thoughtful, intellectual kind of a baseball player.

”You have a guy 26, set him free, man. Let him go. Have good conversations with him. Understand what he’s trying to do out there. Who would not want to work with an athlete like that? Oh my god, that is exactly what you’re looking for to work with. And he’s bright and he’s engaging and he’s fun.”

Maddon, like Jason Hammel, also believes that Jason Heyward is a five-tool player, but even brings more to the table than that and is eager to see more.

“I’m just not about that. He can beat you in the five-tool way. And the sixth tool — just the way he thinks… I find him fascinating. A combination of physical stature, athletic ability, mind … it’s an interesting dynamic.”

Amidst all the praise being bestowed upon him, Jason Heyward seems to be staying humble. Throughout his big league career, he’s been known to be a very likable guy and almost seems embarrassed by all of the compliments being thrown his way.

“I’m not asking them to say any of it. It’s cool. They know me as a person. That’s where it starts — in the clubhouse. We’re family. The camaraderie will get you through the hard times.”

Surely, Heyward is aware of the pressure that comes with signing a big contract and the overall pressure that is on the 2016 Chicago Cubs, who have been picked by many as the favorites to win the World Series. However, he isn’t letting that pressure get to him. He justs wants to play some baseball.

Fans will get their first look at Jason Heyward in a Cubs uniform when Chicago plays their spring training opener on March 3 against the Milwaukee Brewers. The regular season gets underway on April 3.