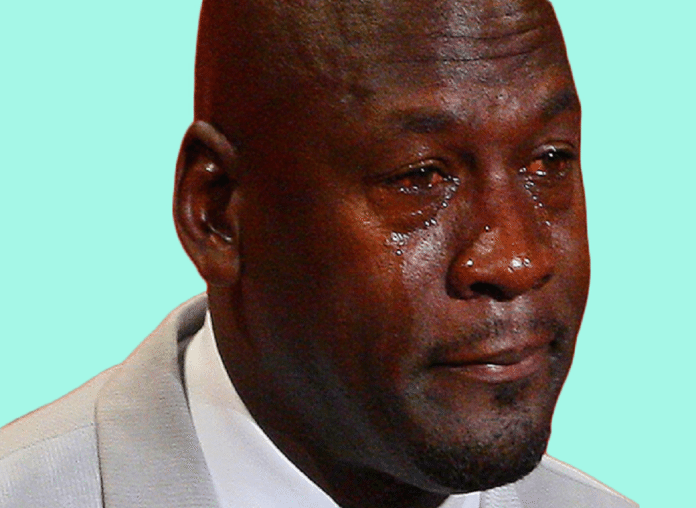 If you’ve been on the internet in the past year, and I’m going to go ahead and bet that you have, then you’ve undoubtedly come across the Michael Jordan crying meme that seems to be just about everywhere. Most recently, you’ve probably seen Jordan’s plastered on the body of Carolina Panthers quarterback Cam Newton, who is getting a lot of heat for walking out of a postgame press conference following the Panthers’ loss to the Denver Broncos in Super Bowl 50.

Cam Newton isn’t the first and certainly won’t be the last professional athlete to get the treatment. But how exactly does Michael Jordan feel about his face being used on one of the most popular memes in the world. Jordan has always been very protective of his personal brand, but in a statement to TMZ by a rep of the former Bulls superstar, Jordan is actually pretty cool with it.

“Everyone seems to be having fun with the meme.”

I think it’s safe to say that Michael Jordan isn’t really known for his sense of humor, so it’s nice to see him enjoying the phenomenon. But that doesn’t mean that he wants anybody profiting from his likeness.

“We haven’t seen anyone using it to promote their commercial interests, which is something that we’re monitoring.”

You certainly don’t want any part of Michael Jordan on that front. Just ask Dominick’s. If you’ll remember, the supermarket chain (who’s now out of business) used Jordan’s likeness in an advertisement a few years back without his permission and a federal jury ruled that they had to pay Jordan $8.9 million. Oops.

Just after that judgment, Jordan spoke with the Chicago Tribune and said that “it was never about the money” but it just wasn’t right for anyone to do that.

“It is my name, and I’ve worked hard for it for 30-something years, and I’m not just going to let someone take it, ” Jordan said. “It’s not the type of court I like to win at. But unfortunately we ended up in this court, and I’m very happy with the result.”

The lesson here is that if you want to have some fun with the Michael Jordan crying meme, feel free. Just don’t try to make any money off of it. Michael Jordan will find you and he will kill you. Okay, maybe that’s a bit much but I think you get the point.