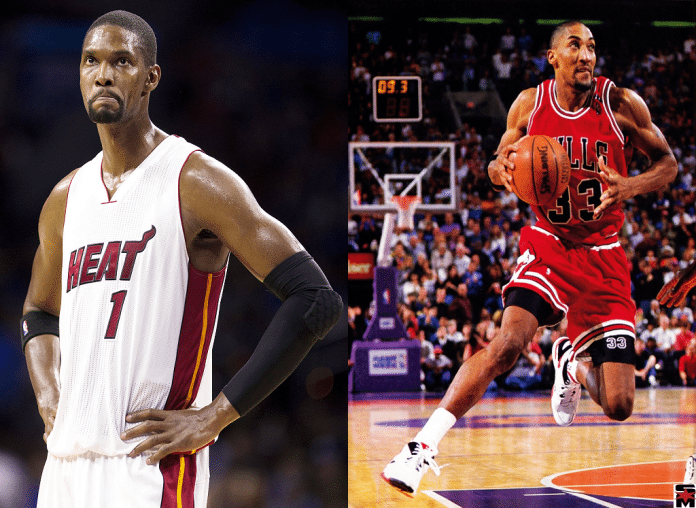 In a recent “5-on-5” feature on ESPN.com, Miami Heat forward Chris Bosh was asked five questions on a variety of topics, one of which was whom he thinks is the most underrated all-time great in NBA history. His answer: Scottie Pippen.

“Scottie Pippen. Yeah, Scottie. Because they always say he was Robin to Batman, and I think that’s so disrespectful. It’s a little personal for me, because I understand filling a role and doing your job and it’s very difficult to do that. You have to be really, really good to win a championship. As good as Michael was, you can’t win a championship by yourself. You need someone who’s your equal or pretty close. It hits close to home but I don’t know what it’s like to win three in a row. He’s pretty, pretty, pretty good [Larry David voice].”

For one, I wish there was a video of Chris Bosh doing a Larry David impression. More importantly, however, is that Chris Bosh is exactly right. Scottie Pippen was an integral part of the Chicago Bulls winning those six championships and everyone knows that. Pippen also got a chance to shine in his prime during Michael Jordan’s first retirement following the 1992-93 season. He averaged 22.0 points per game the following season and was also named the MVP of the 1994 NBA All-Star Game. In the 1994-95 season, he scored 21.4 points per game and also led the league in steals at 2.9 per contest. (Stats via Basketball-Reference)

Pippen was also recently named the 25th best player of all time by ESPN.

6 rings. 7 All-Star appearances. 2 Olympic Golds.@ScottiePippen is No. 25 in our All-Time #NBArank. pic.twitter.com/DLt6BPvRxA