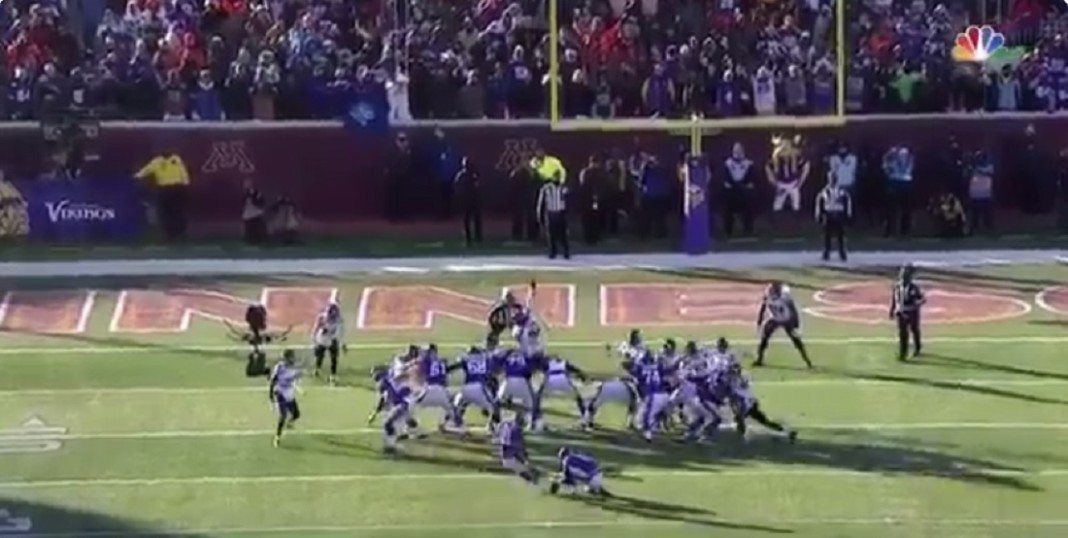 Outside of watching the Chicago Bears win football games in the playoffs, there is nothing better than watching their biggest rivals lose in the playoffs.  Not only lose, but lose is the most heartbreaking ways possible.  Last year it was a beautiful moment when the Green Bay Packers blew a 16-0 lead in the second half of the NFC championship to lose 28-22 against the Seattle Seahawks.  Could that possibly be topped?

The Minnesota Vikings sure gave it their best shot.   Playing in frigid conditions that approached -6 degrees with a -25 wind chill, they had those same Seahawks on ice most of the game.  Riding a fired up defense that was assaulting Russell Wilson, they built a 9-0 lead and looked for the knockout when an errant snap got away from the Seahawks quarterback.

Instead of just taking the sack, Wilson managed to scoop up the ball and throw a pass to Tyler Lockett that he took 60 yards into the Vikings red zone.  Seattle scored a touchdown shortly after, then quickly got the ball back and added a field goal to make the score 10-9.

In the waning minutes, Minnesota got the ball and quickly drove deep into Seahawks territory.  The game was in hand and it just came down to a 27-yard chip shot field goal by kicker Blair Walsh, a man who had gone 33-of-34 from inside 30 yards for his career.

Early blame for the inexplicable gaffe was the Vikings holder failed to turn the ball laces out, bringing back every Ace Ventura reference in living memory.  Truthfully though, Walsh has to shoulder the blame because that kick started left and stayed left.  It should’ve been a gimme and he completely flubbed it.

Bears fans have little sympathy for Minnesota.  Their own kicker Robbie Gould has missed a number of big kicks this season that could’ve gotten them to the playoffs.  In fact the Vikings have been the benefactors of one such kick in the past.  So it’s nice to see the curse has passed on to them.