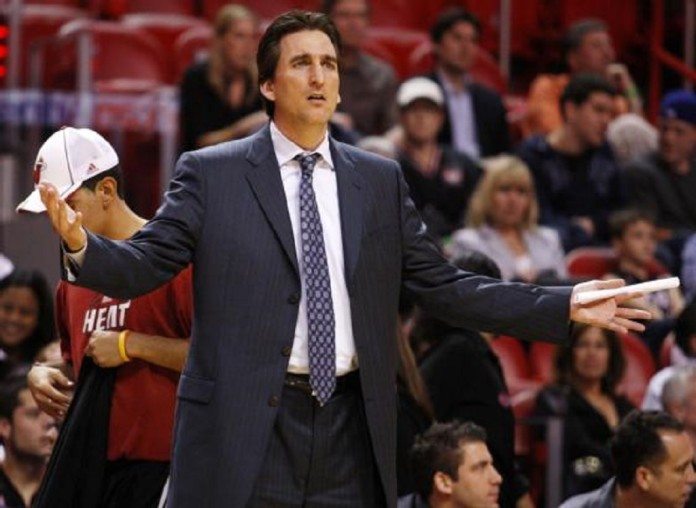 After a loss to the Phoenix Suns on March 30, an irate Paxson walked into the coach’s office at the United Center and confronted Del Negro over a narrow breach of a management-imposed minutes limit on injured forward Joakim Noah. Sources said Paxson first grabbed a hold of Del Negro’s tie and seemingly tried to provoke him with two successive jabs into his chest. Paxson was even heard to angrily challenge Del Negro to a fight.

There were several staff members present, sources said, and assistant coach Bernie Bickerstaff stepped between Paxson and Del Negro and pulled Paxson away.

Sources said Del Negro did not retaliate, mostly out of fear the incident could be used to void his contract without pay or hurt future career opportunities elsewhere. The Bulls have dispatched lawyers to interview witnesses about the incident, sources said.

Because of Noah’s injured left foot, management and team doctors had set progressive limits on the forward’s minutes throughout the season. Paxson and general manager Gar Forman had become angry after a Feb. 26 game against Portland when Noah’s minutes also exceeded the limit. Noah played 27 minutes in the 111-105 loss to the Suns on March 30.

The issue of Noah’s minutes arose again in the Bulls’ double-overtime loss to the New Jersey Nets on Saturday night. Del Negro and the front office had go-betweens exchange information during the game about the possibility of the coach playing Noah past the limit to try to win a game that would help secure a playoff spot.

The Bulls play the Boston Celtics on Tuesday night at the United Center. Chicago needs a victory over Boston and a win over the Charlotte Bobcats on Wednesday or one win and a Toronto Raptors loss to the New York Knicks to secure the Eastern Conference’s eighth seed and a first-round meeting with the Cleveland Cavaliers.

After advancing to the playoffs with a 41-41 record a season ago, Chicago lost a seven-game series to the Celtics in the first round. Del Negro’s job security has been questioned often this season, and much of that has been fueled by tepid public backing from his bosses. He has one year left on his original three-year contract.”

The aftermath wouldn’t amount to much. Del Negro was on the hot seat anyway and was subsequently fired on May 4, 2010. However, the details on what actually happened that night has always been in question and as a guest on “The Vertical Podcast with Woj”, Del Negro opened up a little about the incident.

“There was communication before the game with the team doctor [about Noah’s minutes].”

“Well, John’s a former player, very emotional, and we had various conversations prior to that. And, you know, I think I played Joakim a couple minutes more because I think the game went into overtime.

And, uh, knowing Joakim was going to be out for an extended period of time with his injury, the front office, staff, and the doctor were all on board.

But John just felt like I played him too much and at that time, it wasn’t our first conversation. It became heated. And it was just an unfortunate thing. Something I’m not proud of, I’m sure John isn’t as well. He’s apologized, and, those things, he’s the boss.

You can’t have a precedent like that, you can’t handle the things the way they were handled and it’s unfortunate. And a lot of things haven’t been said about it, nor should they. It’s between John and all of those things are behind us. To me, it’s about the players, about the Chicago Bulls and the fans and the great city there.”

“It happened so fast. I mean, you know, it was really kind of funny to me to be honest with you. Disturbing but funny. But it didn’t surprise me. You’re in a position where you really can’t do anything but you want to but you can’t. At the end of the day, I’m actually proud of the way I handled it. Could have handled it much different but didn’t see the point and there was a lot of other circumstances in that moment that I think had built up to that.”

It seems that the incident took place exactly how it was originally described, but maybe that’s just how I’m interpreting what Vinny had to say. I can’t say that I was always on board with Del Negro as a head coach, but I certainly do respect him taking the high road in this situation. The Bulls’ front office has never been the most respected bunch in the league and if you listen to the rest of that podcast, you’ll certainly hear Wojnarowski really giving it to them. In the end, it is what he said it was. It’s two competitive guys, both of whom are former players, in a heated situation that got a little out of hand. It’s the NBA. Things like this are going to happen.