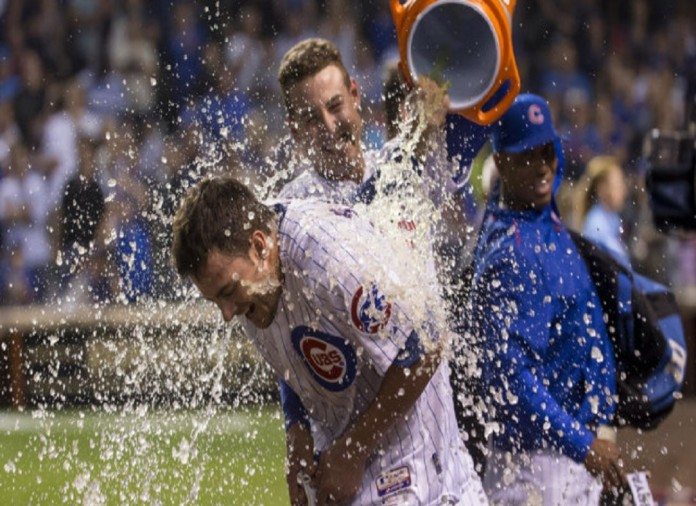 This past weekend at the Baseball Writers’ Association of America awards dinner, Barry Zito let everyone know that he’s had a long-running “All Dreamy Team” and that Chicago Cubs pitcher Jake Arrieta, who was on hand to pick up his Cy Young Award, has been on it for a while, as is MVP Bryce Harper. Who knew, right?

Not to be outdone, two writers from the New York Daily News, Kate Feldman and Nicole Bitette,  came up with their own “Field of Dreamy” list, wherein they posted a picture and a quick blurb on their choices for the sexiest players in Major League Baseball. Two of those players are Chicago Cubs, first baseman Anthony Rizzo and third baseman Kris Bryant.

“The veteran of the young Cubs infield, first baseman Anthony Rizzo is a two-time All Star, but a lifetime honoree for us.”

Feldman and Bitette aren’t the only ones who are fans of Rizzo.

Never realized how hot Anthony Rizzo (Cubs 1B) is until now soo hes my #MCM pic.twitter.com/CQbRZiolVo

“It only makes sense that the Cubs have their hottest player, Kris Bryant, at the hot corner.”

And there’s certainly not a shortage of Kris Bryant admirers out there.

Can you tell the difference? The Cubs are so hot right now. @KrisBryant_23 @benhiggi pic.twitter.com/1RUYPmPLqr

Mad because Kris Bryant’s fiancée is not as hot as he is ?

Sounds like the last one was a little upset that Kris Bryant got engaged. Nevertheless, the Rizzo and Bryant admirers will get to see them back in action soon enough.