Home Chicago Bulls Jimmy Butler Has The Chance To Do Something That Hasn’t Been Done... 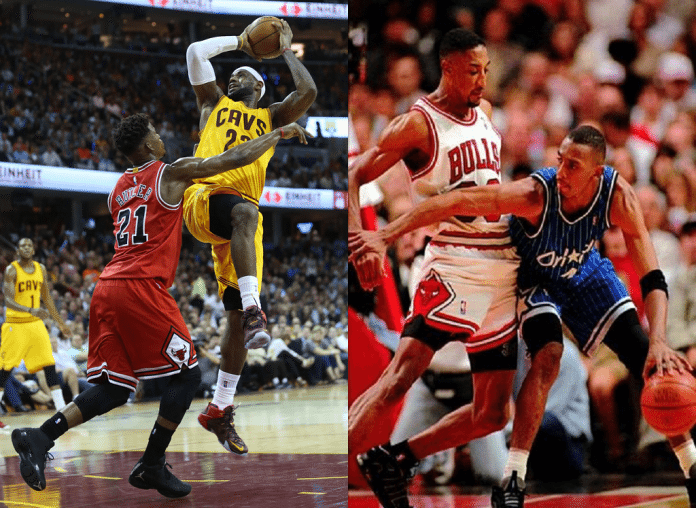 It’s been quite the week for Jimmy Butler. Just last night at the United Center in a 117-106 Bulls victory over the Milwaukee Bucks, he put up 32 points on 11-for-21 shooting and tied a career high with 10 assists. The performance was enough to garner some admiration from coach Fred Hoiberg and even his sometimes nemesis, Derrick Rose.

Perhaps that praise was also due to the fact that in the previous game against Toronto on Sunday, he broke a record held by Michael Jordan by scoring 40 points in the second half of an incredible 115-113 victory over the Raptors, even getting some love from a Bulls Hall of Famer for that one.

What a performance by @JimmyButler. You don’t see individual efforts like this too often.

However, it’s been Butler’s efforts on the other end of the floor that has him in position to tie a mark set by that same Hall of Famer in 1994.

Scottie Pippen was always thought of as one of the best defenders in the league in his day and has eight All-NBA Defensive First Team and two All-NBA Defensive Second Team honors to back that up. He averaged 2.0 steals over the course of his 17-year career. Butler hasn’t quite gotten to that level yet, but he has matched those two All-NBA Defensive Second Team accolades and has averaged 1.4 steals in his young career. He’s currently sitting in 12th in the NBA this season at 1.82. A swipe against the Celtics on Thursday night would tie Pippen’s mark, but he’ll have to keep up this pace to get to the top of the list.

With the way Jimmy Butler has been playing on both ends of the floor, I wouldn’t bet against him on anything right now.