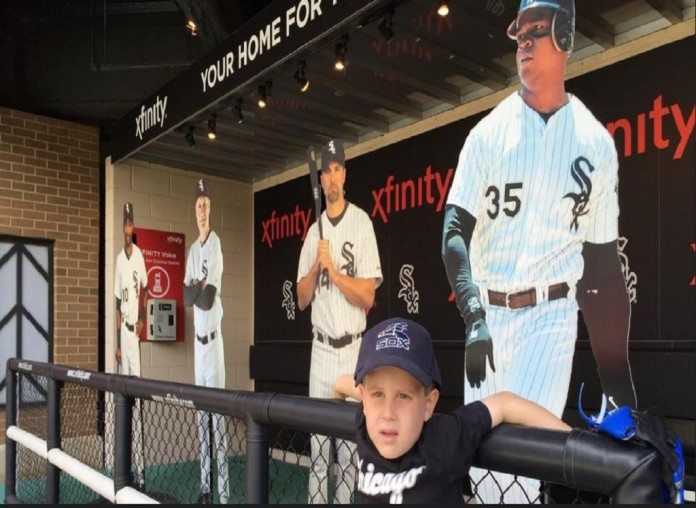 The crosstown rivalry between the Chicago Cubs and the Chicago White Sox has long been a heated one, but the story of a 5-year-old White Sox fan and a 35-year-old Cubs fan is so much bigger than baseball.

Just after he was born, Drew Duszynski was diagnosed with autosomal recessive polycystic kidney disease and has been receiving treatments for the majority of his young life, often depriving him of the endurance and energy needed to simply play like a normal child. But that didn’t stop Drew from trying.

“Drew has rolled with it as much as a 5-year-old can”, explains his mother, Pam Schulz. “He loves sports and has wanted to play all of them since he was little. He’d get frustrated playing kickball, not being fast enough to run. Often, his friends would assign a base runner for him.”

Drew’s regimens included up to six daily medications to combat things such as high phosphorus, high potassium, and rising blood pressure. However, in 2014, his kidney function began to further decline and by the summer of last year, there was no other option than to remove both of his kidneys. He would receive dialysis treatment while he slept, but the only thing that would ultimately save his life was finding an adult donor.

Enter Chris White, who had heard about Drew’s story after his wife, Amy, had learned of the Team Super Drew page the Duszynski family, who reside just outside of Milwaukee, had started on Facebook.

“We didn’t know Chris White, but I noticed he kept trying to friend us on Facebook, ” Schulz said.

White, an Uptown resident, also had a very good reason to get involved.

“When I first started dating Amy, she was getting ready to donate to her dad. I remember after my wife donated to her father the miraculous recovery he went through…”it was for me a no-brainer.”

There’s also the fact that he has a son who is approximately the same age as Drew, so when he found out he had the chance to help a young child in need, he jumped at the chance to help. Chris took the necessary steps and was medically approved for the procedure. The surgery was scheduled for mid-December at Children’s Hospital of Wisconsin in Milwaukee, but the two parties who will now be forever linked met up a couple of weeks beforehand.

“I first met Drew at a Bulls game two weeks before Dec. 14, our op [surgery] date, ” White said. He noted that Drew was “just a 5-year-old. Active and a little rambunctious, he was talking up the players and keeping tabs of the Bulls’ score, every second.”

Well, at least they have that in common. The surgery was a success and the families have stayed connected. Over the holidays, the Duszynski family, who are actually a split household as Drew’s mom is a Cubs fan while Drew and his father, Don, are White Sox fans, sent the White family some Cubs gear as a thank-you gift. Drew is doing well and his mother says he has “much more energy” and is “eating like a truck driver.”

As for Chris White, he’s back to work and jokingly hopes that his donation can spark change.

“I hope that my donation might, at some point, set him straight and influence Drew’s choice in baseball teams.”

Amazing story. Thank you to Chris and Drew for showing us that it can be fun to poke fun at one another about our favorite teams and such, but at the end of the day, it really doesn’t matter.

Andy Frye of RedEye was the original reporter of this story.