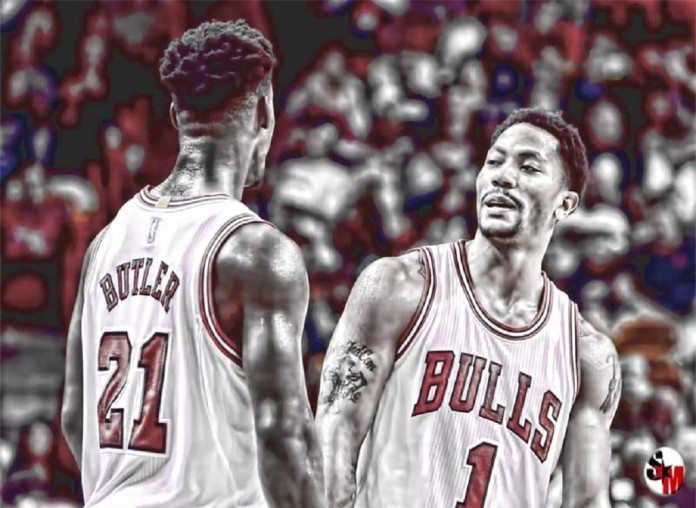 Coming off a record-breaking night in Toronto on Sunday, in which he scored 40 points in the second half, Jimmy Butler followed up with another 32 points at the United Center on Tuesday night. Shooting 11-for-21 in the 117-106 victory, Butler also tied a career high with 10 assists and had this to say following the game:

He’s dishing, he’s scoring, and he’s leading this Chicago Bulls team to win after win these days. Their win on Tuesday night was their fifth in a row and the team is looking as sharp as it has all season long. It’s a far cry from a few weeks ago when Jimmy Butler was making harsh comments about his coach and his teammates were questioning his leadership. However, things seemed to have taken a turn…well, at least this week anyway. When head coach Fred Hoiberg was asked about Butler’s recent play, he had nothing but praise for his superstar.

“Absolutely I think Jimmy has reached elite status in this league. He’s such a complete player. It’s a testament to what he does in the offseason. He just continues to add new elements to his game. He was in [the practice facility] at 8 AM [Tuesday] morning getting shots up. And he’s never satisfied. And I think that’s the true sign of a superstar, when you continue to work when you have success.’’

Hoiberg was quick to get a joke in there as well.

“I was a little disappointed in Jimmy. Coming out of the gate and only going for 20 [in the first half].’’

It’s no secret that Jimmy Butler and Derrick Rose have had their issues over the years, but even the Bulls point guard, who returned to action after missing the last three games with a sore right hamstring, had to agree with what his head coach had to say. When asked if he agreed with Hoiberg’s comments, this was his response:

“Yeah, I think so. The way he’s playing, the patience he’s playing with. You can just tell the game is slowing down for him, especially when he’s playing pick-and-roll.

It’s fun to see, exciting. I’m happy for him. For a player like him to come into the league, and for him to improve the way he’s improving, and being on my team. Like it’s good. I don’t really have to do too much when I’m out there because he’s taking great shots and he’s making the right plays.’’

That’s nice to hear, especially since Rose’s camp was reportedly annoyed by some of Butler’s recent claims and comments. The Bulls are always going to be a better team when these two are on the same page. If both can stay healthy, then the Bulls could be a force to be reckoned with in the East, especially if they continue to play the way they’ve been playing. Of course, as it’s been over the past few years, that’s a big “if” when it comes to Derrick Rose, but there were a few instances last night where he looked like the Derrick Rose we enjoy watching. There was a little rust there, but he still showed some explosiveness and scored 16 points on 8-for-17 from the floor.

The Bulls look for their sixth straight win on Thursday night at the United Center as they host the Boston Celtics and Jimmy Butler has a chance to tie a mark set by Scottie Pippen 22 years ago in that game. We’ll see if everybody can continue to get along and keep this momentum going.