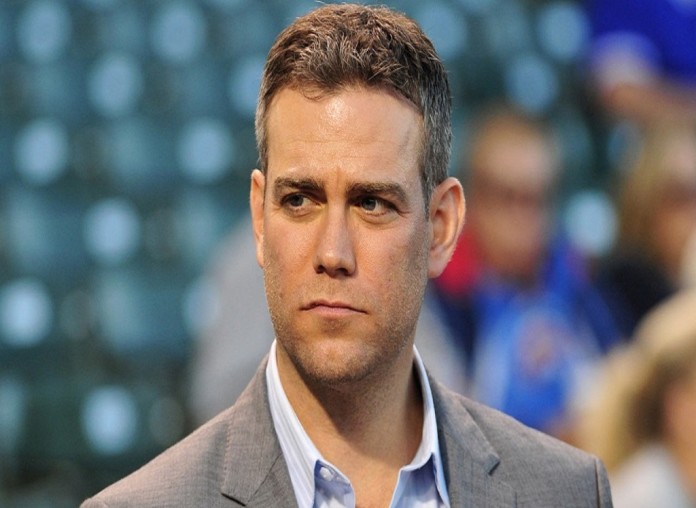 In the original article below, Theo Epstein states that the Cubs just couldn’t compete financially with the Boston Red Sox to obtain free agent pitcher David Price, who signed a 7-year, $217 million contract last week. We now know what the Cubs offer was, according to sources that spoke to 670 The Score’s Bruce Levine. 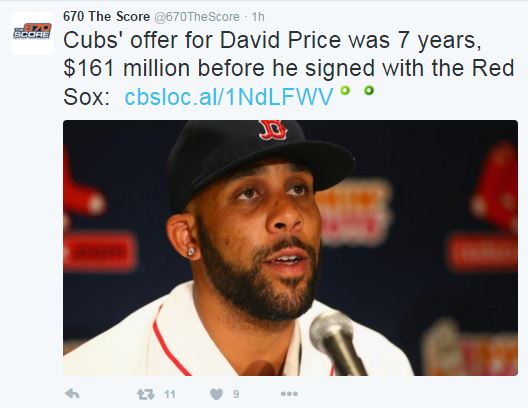 It’s also being reported that the Cubs offer to Jeff Samardzija, who on Saturday signed a 5-year, $90 million contract with the San Francisco Giants, was the same $18 million per season, but the length of the contract wasn’t as long.

Free agency in Major League Baseball is in full swing and the market, especially in the pitching department, is currently providing some of the biggest contracts we’ve ever seen. Zach Greinke, once being pursued by the Chicago Cubs, shocked the world and signed with the Arizona Diamondbacks to the tune of 6 years and $206 million. The $34.3 million average yearly salary is now the highest in MLB history. Miguel Cabrera once held that distinction at $31 million, which was tied earlier this week by yet another pitcher that the Cubs were thought to perhaps have a chance of signing, David Price, who signed a 7-year, $217 million contract with the Boston Red Sox.

I’m not here to rehash the interest that Price had in Chicago and his former relationship with Joe Maddon, as we’ve already been down that road, and the Cubs were apparently never really in the conversation for Price anyway. President of Baseball Operations, Theo Epstein, spoke out on Friday on how everything played out.

“We had a lot of interest in David, and I think the Cubs are certainly one of the organizations he could have seen himself with. But the Red Sox were aggressive and signed him and they got themselves a great pitcher. I wish him success there. Obviously, it was a big contract and they’re a little bit more fully developed and fully realized from a payroll standpoint now – and it’s a place we hope to be in several years. Right now, we just couldn’t compete at that level.”

I guess it really was that simple. The Red Sox were willing to pay a 31-year-old guy $31 million per year and the Cubs weren’t. Honestly, I’m not even upset with it. Would it have been nice to add David Price to the staff? Sure, but at that price, especially with the disappointing year the Cubs just got from Jon Lester and his high-priced contract, no thanks. At some point down the road here, the Cubs will have more money to spend, what with the TV deals they’re working on and some lingering restrictions from the Ricketts family buying the team going away, but they’re going to need that money to keep guys like Kris Bryant once those rookie contracts expire.

The Cubs have already moved on, signing John Lackey to a two-year contract, and Epstein seems poised and ready to go for the winter meetings, which get underway tomorrow in Nashville.

We’ll certainly be keeping an eye on the winter meetings, and we’ll be updating all the transactions that happen, so be sure to check back with Sports Mockery for all the latest news and rumors.