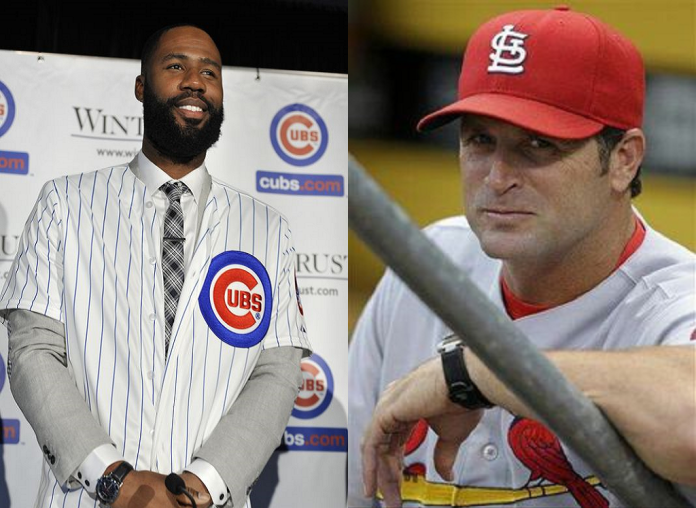 One of the greatest rivalries in baseball reached all new heights in 2015 as Chicago and St. Louis met for the first time in the postseason as the young Cubs ousted the veteran Cardinals in the National League Division Series in four games. The Cubs took things a little further by adding two former Cardinals to their roster this offseason, pitcher John Lackey and one of the biggest prizes in free agency this year, Jason Heyward, who signed an eight-year, $184 million contract and was officially introduced as a Cub at a press conference last week.

The Cardinals, who traded for Heyward before the start of the 2015 season, were in the running to retain Heyward’s services, but the 26-year-old outfielder chose the Cubs instead of returning to St. Louis and explained exactly why when talking to Chicago reporters last week.

There were already moves with Jon Jay gone, and then Tony Cruz, and Wainwright is probably going to be done in three or four years. I think that’s when his contract is up. Not to say he won’t play any longer, but guys like that are what really introduced me to the St. Louis Cardinals organization. I felt like if I was to look up in three years and see a completely different team, that would kind of be difficult.

Chicago really offers an opportunity to come into the culture and be introduced to the culture by a young group of guys. Grow up with them and still watch myself grow up and have some fun with some familiar faces for a long time.”

It took a few days, but Cardinals manager Mike Matheny finally responded to Heyward’s comments via the St. Louis Post-Dispatch and he didn’t seem too pleased about what his former right fielder had to say.

“I don’t think it’s going to ring too well with our club.

I told Jason this before. I’ve got a lot of respect for Jason as a person. He’s got to go make the decisions he’s going to have to live with. If that (core group comparison) is a big deal to him, he’s just being honest with people.

But I don’t think we have anything to apologize for in having a group like a Holliday, a Molina, a Wainwright. Those are the kinds of guys everybody wants on a club.

I see where he’s coming from. I mean, look at what Chicago’s done. It’s very unique in this game — to have that many impact players at that young age. And he’s a young player. But I can’t say I’m in any kind of agreement with that (Chicago) core being better than any kind of core that we have.

That veteran group (that the Cardinals have) also helps drive what the younger group turns into.

I don’t blame him. But I don’t like it. I thought we created a really good atmosphere and he had to weigh what was most important to him.

Say if we hadn’t won. … That would have made a difference. Say if we hadn’t created an atmosphere where he was a major part of what we’re doing. … Neither of those is true.

Say we hadn’t made an offer. We made a terrific offer. With all that being said, it comes down to what does a guy want? (Staying in St. Louis) just wasn’t what he was looking for.”

Now, maybe it’s just me but I honestly don’t believe that Jason Heyward was trying to insult the Cardinals organization or its players whatsoever. He didn’t insult any of the players he mentioned, nor did he ever say that he wouldn’t like to have those guys on his team and seems to have a genuine respect for those individuals. He’s merely stating what is actually true. The core of the Cardinals lineup is getting older and probably won’t be around much longer as he enters the prime years of his career. As a member of the Cardinals, he saw firsthand what the Cubs are capable of, likes the direction they’re headed, knows that he can be a part of something special with this young group of twenty-somethings that the Cubs have and made a choice. Maybe Matheny is just looking to give the Cardinals some bulletin- board material for next year, or maybe he realizes that the tide may finally be turning in this heated rivalry, a rivalry that renews in 119 days.