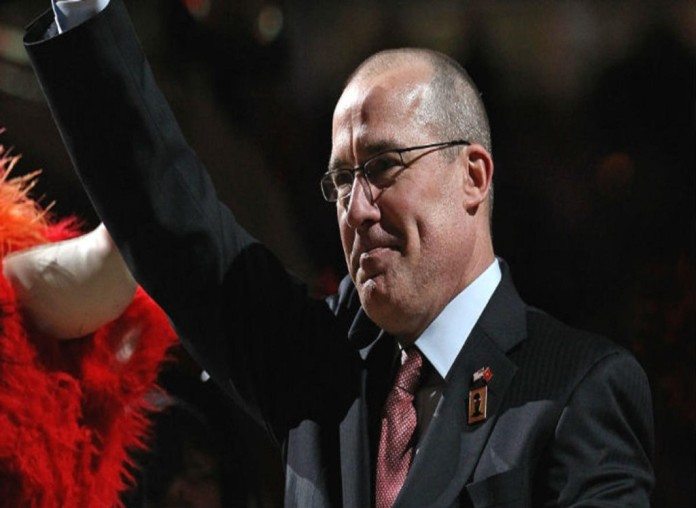 A few hours before the Chicago Bulls took the floor for their Christmas day matchup with the Oklahoma City Thunder, which they won 105-96, executive vice president of basketball operations John Paxson spoke with David Schuster of WSCR-670 AM, which you know better as “The Score“, and basically gave a “state of the Chicago Bulls address”. He discussed a wide variety of topics, including the recent comments from Jimmy Butler, the progress of Derrick Rose, and his thoughts on how first-year head coach Fred Hoiberg has done thus far. Here are a few of the highlights:

How He Felt About The Recent Comments Made By Jimmy Butler

“You never like to see any of your laundry aired publicly. I know it’s more difficult in this day and age. Jimmy, the hope would’ve been he would’ve addressed it head on with Fred, the staff, teammates. Since that time, both Fred and Jimmy spoke. We talked to both Fred and Jimmy about it. The hard thing now is the (second) game after this will be a nationally televised game on Christmas Day and that will be a huge storyline. My feeling is that as long as it’s been addressed, which it was, and the parties are there to move on, it will be OK. When you lose and our schedule not getting any easier, it’s very easy for anyone to point fingers. But the reality is what you have to do and what you have to understand is if you’re not in this thing together, then you might as well not be in at all. The team is always most important, comes first. And our group has to rally around one another. Yes, we made a coaching change. Fred has a lot to learn. He’ll acknowledge that. We all will. The system that he wants to implement offensively is taking some time to really come to fruition. And when you don’t have certain players in terms of spacing the floor like Dunleavy — and that’s not an excuse it’s just our reality — that can slow the process as well. My feeling is it’s been addressed. You don’t want it to happen again. You have to understand the big picture in this and we have to learn from it and move on.”

“There’s too much talk of leadership and those type of things around our team right now. The reality is — and you’re right: I played with some real strong personalities — when you’re a player, you have to understand you’re in a team sport. You’re working with other individuals. But the first priority is yourself. You have to take care of yourself and have yourself ready as an individual to compete at the highest level. You also have to understand that leadership is done in a lot of different ways. And the best way to do it is by going out and doing your job every single day. Going out and showing your teammates you’re invested in them and the team. And sometimes, words and trying to be a vocal type of person, that’s really not what’s important. What’s important is you’re there every day to show them that you’re about the group and you’re going to do whatever you can to be about the group. Sometimes that means you have to sacrifice a bit too. Our situation this year is different. Some roles have been changed. Jimmy has grown into a lot of different roles for our team. He’s obviously our best player at this time. When you think about what he gives us every night on both ends of the floor, the amount of energy he expends and his commitment, that to me, that example is enough. But there’s no question we have long way to go as far as coming together as a group.”

His Thoughts On How Fred Hoiberg Is Doing

“Fred is doing fine. And he’s gotta keep reinforcing what he wants out on the floor. The challenge for all coaches is just that. You have a vision of how you want to play. You use the practice floor to show players that vision and what you expect from them. Every guy has a personality. I played for Phil Jackson. He sat most of the game. He was laid back but intense. You see some coaches who are up and down, maniacs on the sideline. A lot of it is your personality. I learned a lot from Phil in that he tried to show calm so that when you were in pressure situations, you could look over there and see somebody under control. I found that to be effective. I believe that. The last thing as a player that you need when there’s stressful situations is to look to the sidelines and there’s a guy over there going nuts. I see that in college all the time. The college coaches have such a latitude in terms of their sideline behavior. They’re given free reign to run on the floor, act crazy. If I was a player, I’d look over there and see that and I’d feel personally that would be a detriment to how you react. Every coach has his own personality. You can’t be something you’re not. Fred is a young coach. He has a lot to learn. I think the biggest challenge always is to create the vision you want for your team, lay it out and practice it every day, reinforce the things you want. And then the players have to get on the floor and play the way that you envision.”

“Derrick is still trying to find his way. He has shown some flashes this year. I thought the other night, even though we lost to Brooklyn, for two-and-a-half quarters, his push and pace up the floor were more of what we need to see. . . . He’s been through a lot. It didn’t help when one hour into our first preseason practice this year, he got hit in the eye and broke that bone and was out for all of camp. He has had some bad luck along with all the major injuries. Derrick like a lot of guys needs to be more consistent. That’s not a revelation. He has shown some flashes. But he has to do things at a higher level for us to be successful. That goes to a lot of our guys right now.”

“We’ve given Tony Snell an opportunity. And Tony has had a few moments but to be very candid, he has needed to play better and with some more consistency. That’s not been the case. As you saw the last game, Fred went with a little different lineup and Tony didn’t even play. Young guys need to take advantage of their opportunities. We need Tony to step up and do that on occasion.”

“We kind of got caught because this thing didn’t arise until right before training camp. It’s been probably an underpublicized issue with our team. Mike is a veteran. Obviously, he’s got some toughness to him. He can shoot the basketball. Last year, he missed 19 games for us and we were only 9-10 in those games. So he has a big impact and especially when you make changes with your staff like we did. The fact he wasn’t available since Day One and not here for the first two months, it has hurt as well.”

Reaction To Fans Being Angry and Possible Trade Options

“Fans have that right. We’re sitting here and trying to look at ways all the time to improve our team. Our reality is that right now we have a really high payroll. Let’s face it: When Derrick got hurt in 2011, the dynamic of our team changed. We tried to put some pieces together waiting for him to come back. And his game is still trying to come along again. It’s been a tough process for all of us. We’re looking at everything. If at some point we feel like we need to make some changes, do something different with the roster, we talk to teams all the time. I know Gar is on the phone with teams every day. If there’s a way to do something different as we look at this, we certainly will. But you need two partners to get something going. And right now there’s not a lot of stuff going on this time of year. But it will all pick up as we get towards February and we’ll have a better idea about our team by then. Hopefully Mike and Jo are back and we can see if this group can find some sort of rhythm.

Just because we haven’t done something in the past doesn’t mean we won’t do it. We’ve made some deals at the deadline several years back. The last three or four years, we sit in a room with our coach and talk about our roster and when everybody thinks to seem we have a chance with that group, you tend to stay with it. We have individual pieces that we like. Right now, it just doesn’t seem to be meshing the way that you’d like. And we’ve had inconsistency. Some of the guys we need to shoot from deep better aren’t shooting a great percentage. And we need more of that. Some guys we need to step up and play defensively aren’t consistent. The one thing I think we may be lack as much as anything is just kind of a toughness to us. And I think that a guy like (Bobby) Portis can give us some of that, someone who is willing to stand in there and give some blows. As I watch our team this year, we seem to be the ones taking the blow as opposed to giving it. That’s not to say you’re playing a dirty style of basketball. But it’s still a physical game. And you can’t always be reacting to play. We need individuals to kind of look at themselves and play better individually and I think that will help our entire situation.”

That’s a ton of information to react to. How are we all feeling about what John Paxson had to say?