I’m not quite sure when people started looking to Ron Harper on things, but his name has been coming up a little more than usual in recent weeks. First, he spoke to TMZ defending Michael Jordan in the wake of the Kareem Abdul-Jabbar mess, and now he’s defending the Chicago Bulls teams he played on in the late 90s. If you’re not aware, the defending champion Golden State Warriors have started the 2015-16 season with an 11-0 record, which is naturally going to bring up a conversation about them breaking the record set by the 1995-96 Bulls, who finished that year with a 72-10 record.

Well, Ron Harper isn’t saying that the Warriors might not do that, but he’s certain that those Bulls teams that he helped win three straight NBA championships were better. 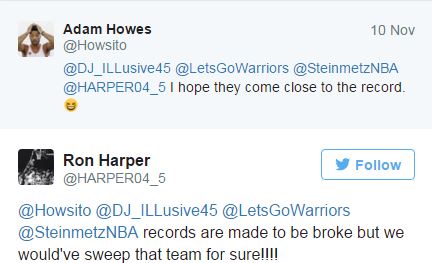 Okay Ron,  it’s “would sweep” or “would’ve swept”, but I’ll let that slide since you’re trying to make a point. 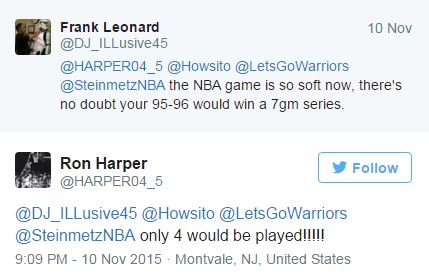 Damn, he’s serious. Just to be clear, I do agree with him that those Bulls teams would beat the Warriors. I’m not sure if they would sweep (none of the Bulls six title teams swept an NBA Finals), but I do think they have the better overall team. The defense of the Golden State Warriors is very good, but the Bulls had Michael Jordan, who if you don’t remember actually did once win a Defensive Player of the Year Award. They had Scottie Pippen, who was on the NBA’s All-Defensive team 10 times, and Dennis Rodman, who was there solely for his defense and rebounding, so they’ve got the edge there.

Offensively, yes, defending MVP Stephen Curry has started this season with a bang. His stats are crazy through the first 11 games (33.4 points per game, 51.7% from the field, 45.2% from three-point range, 5.1 rebounds, 5.6 assists, and 2.5 steals per game), and barring injury, he probably will win the MVP again. But the Bulls had Jordan. One of the great things about writing about the Bulls is that I can usually just go to that as an argument. I could sit here and list stats all day on the five-time MVP and six-time NBA Finals MVP, but it wasn’t even just him. Pippen would have been there to neutralize Klay Thompson. Rodman would have made guys like Harrison Barnes and Draymond Green work for everything. Toni Kukoc was coming off of the bench, and I don’t care if you want to knock him or not, that guy could play. Luc Longley was actually quite underrated, and while he may not have the overall skill that Andrew Bogut does, it would have been fun to watch. And yes, Ron Harper himself did contribute, and you know what else I found in my research that may be the most shocking part of this entire article. During that second historic three-peat run, Ron Harper was making more money than Scottie Pippen. No, I’m not kidding.

Here are the salary lists for those three seasons from 1995 to 1998, thanks to basketball-reference.com 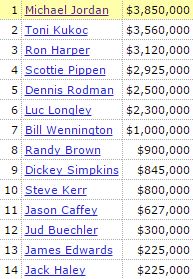 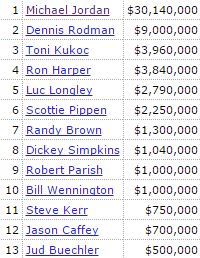 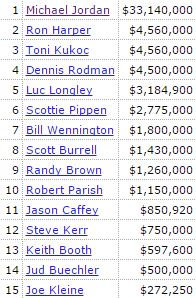 Now that’s something to tweet about, but I digress. The Golden State Warriors are a very, very good team, and if they do get to 73 wins, I’d be the first to congratulate them. A series between these Warriors and those Bulls would have been extremely entertaining, but just as it will always be, we’ll never know what would happen. It doesn’t mean that we won’t continue to compare teams from different eras; it’s a natural part of sports conversation and it leads to some of the best arguments in sports bars across America. But if Ron Harper says he’s certain that the Bulls would sweep, who am I to argue?