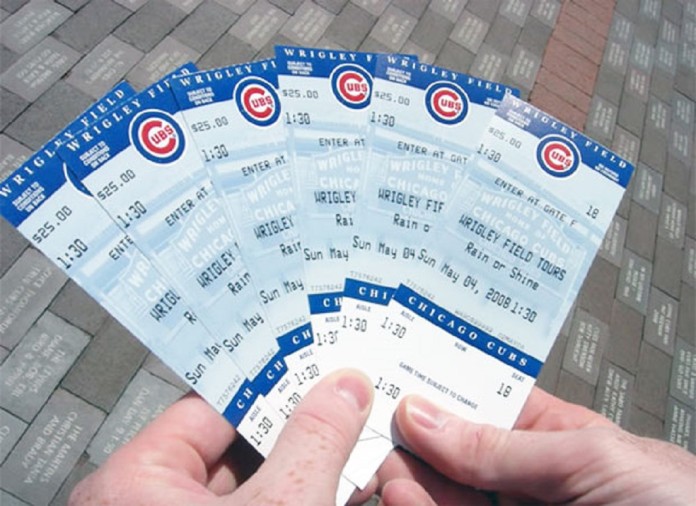 The 2015 Chicago Cubs were awesome to watch. There’s no getting around that. It was easily their best season since 2003, and nearly three million fans (2.959 million to be exact) came to Wrigley Field to get a glimpse of the future. The Cubs won 97 games in the regular season, good for the third-best record in baseball, beat the Pirates in the wild card game, and defeated the rival St. Louis Cardinals in four games in the National League Division Series before being swept by the New York Mets in the NLCS. The future is here, and 2016 is shaping up to be a historic season on the north side. The team just wants you to pay a little more to come and watch the action at Wrigley Field.

According to Team Marketing Report, the Cubs had the third-highest average for ticket prices in 2015, and now, in the highest price increase since 2010, the average ticket price will go up by about ten percent. The team’s Senior Vice President of Sales and Partnerships, Colin Faulkner, explains the actions.

“We’ve clearly seen an increase in demand, so that helped factor into an increase in our prices. Our goal is to remain competitive for the long term and provide value to our fans for a competitive baseball team, but also (value) in their tickets.”

The number of “marquee” games has jumped from 9 to 14 for next year, the only of which that has been officially announced is a game in September against the Cardinals, so that bumps up ticket prices for those five games. In addition, a section of the outfield terrace reserve has been reclassified as a corner box reserve, and that section will see a crazy 43% increase in pricing. Ouch.

The highest average price (including that lovely amusement tax) for 2016 is $118 for a club infield box, while the lowest is $23 for an upper deck outfield reserve seat. Thankfully, bleacher seats are expected to remain about the same.

Bruce Levine of CBS Chicago gave a quick breakdown of how this breaks down.

“What this means is the franchise should reel in an extra $20 million based on three million tickets sold next season. The average ticket price will jump to around $51 for 2016.”

Keep in mind that those figures are the face value of the tickets. I think every one of us that’s ever been to StubHub can attest that in a lot of instances, you’re going to pay more than that. Factor in the souvenirs for the kids and the beers you know you’re going to drink, and the average cost of going to a game at Wrigley can be quite high. The question will always be if you think it’s worth it or not. Ticket prices go up constantly, but the Cubs continue to draw around three million fans each year, and with the team they’re going to put on the field in 2016, the expectations that come with the success they had this year, and the overall ambiance that comes with arguably the best ballpark in baseball, I’m quite certain that these increases won’t affect the overall attendance. It will just affect your bank account a little more.