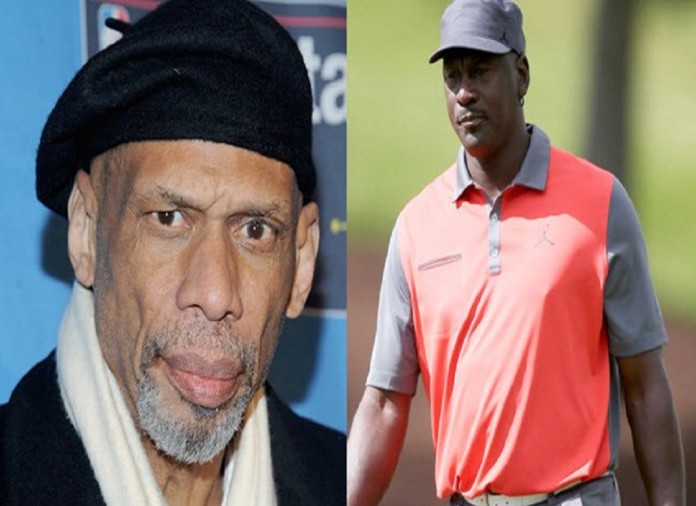 Over the past few days, NBA legend Kareem Abdul-Jabbar has been making the rounds in the media to promote his new documentary,  Kareem: Minority of One, which premiered on HBO last night. The new film covers Kareem’s life in basketball, from his childhood to his time at UCLA and his 20-year NBA Hall of Fame career, but in a recent interview with NPR, Kareem’s focus wasn’t on basketball itself, but instead on the political stance (or lack thereof) of arguably the game’s biggest name of all time, Michael Jordan.

You see, back in the 90’s, at the height of his fame, Jordan was asked to endorse Harvey Gantt, who was Charlotte’s first black mayor, in a  Democratic Senate bid against the very controversial Republican incumbent Jesse Helms, thought by most to be a bigot. Not wanting to get involved, Jordan declined, but in a way that pissed a lot of people off, reportedly saying that “Republicans buy sneakers, too.”

Even 25 years later, the comment still bothers Kareem, who is never shy to speak his mind on political matters. This is what he had to say:

“You can’t be afraid of losing shoe sales if you’re worried about your civil and human rights. You can’t be worried about that. It’s just the way it is. He took commerce over conscious. That’s unfortunate for him, but he’s got to live with it.”

I wonder how Jordan, the NBA’s only black majority owner, whose decision to put shoes over politics still makes him about $100 million per year, is living with himself. My guess is that he doesn’t feel “unfortunate” most days. Look, I can understand where Kareem is coming from, but Jordan didn’t want to get involved, so he didn’t get involved. Kareem chooses to speak out on political affairs, and he has for a long time and that’s okay. Jordan doesn’t, hasn’t, and probably never will, and that’s okay too. That’s the beauty of living in this country. I don’t know what side you’re on in this argument, and frankly, it’s none of my damn business, just as Jordan’s reasoning for not taking a side back then was his business as well. What’s my take, you ask? Well, I’d rather not say, I mean, Republicans read my stuff too.